During the last three months the whole planet is caught in the turmoil of the Corona pandemic.

In the news we are constantly overwhelmed with facts and findings concerning the SARS-CoV-2 virus. As a mankind we were all, and still are, astonished by how this virus spreads all over the world and in a rather short time becoming a global issue. In particular, notion of the mysterious

appears in much of the media. While it is not at all obvious what this quantity measures exactly, it is obvious that making it smaller than 1 really is crucial in controlling the spread of the virus. So what is this

really? Here we make an attempt at explaining this in the easiest possible way.

As a result of the size of the COVID-19 pandemic, governments have taken drastic measures to halt the spread of the virus above critical levels. This is called “flattening of the curve”, and should smoothen out the peak on the health care system. Teams of experts are working frantically in designing appropriate policies, increasing awareness, monitoring the spread of the virus and trying to develop vaccines and medicines against the virus. In the end, abiding to some simple rules, like social distancing, seems to be a very efficient measure to decrease the spread of this, and actually, any virus.

Besides these measures it is important to realize that herd immunity might in the end help us further. Herd immunity means that people who have not yet obtained the disease are effectively shielded from becoming infected by all the immune people around them, who will not spread the disease. Indeed, during the epidemic a sufficient amount of individuals will eventually become immune, which means that they have been infected, recovered and have developed antibodies against the virus. Therefore, they help avoid an after-shock until the crucial moment that a vaccine is finally developed.

It is important to note that herd immunity is not an objective in itself when policies are made but a beneficial result of the fact that people recover. For how long recovered patients are immune against a new infection from the Corona virus is however not entirely clear yet.

This collective immunity, which works as a shield for those not infected by cutting possible transmission routes of the virus in the population, is called herd immunity since susceptible people will be protected by a herd of people who have become immune. The estimate is that the percentage of people who are immune needs to be around 60% to effectively stop the disease from spreading, not just for COVID-19, but also for a disease such as the measles.

The question now is, how can all this be quantified?

In this article we focus on the question how the virus spread so fast and all over the world. Furthermore we discuss how measures like social distancing help to slow down the virus spread. Although this is a question that seems to primarily concern the past period since the virus has already spread around,  answering these two questions can still help us to understand exactly how we should go back to our normal way of life after the crisis is over. Because designing such an “exit-scenario” is a hugely complex endeavor, the same simple rules discussed above will again play a key role.

The answer to both questions raised above lies in understanding some facts about the Basic Reproduction Number, usually denoted by

, and the Effective Reproduction Number, denoted by

. These are highly delicate objects to properly define, and they are central in epidemiology.

In a nutshell, an epidemic spreads in a population when

, while it dies out when 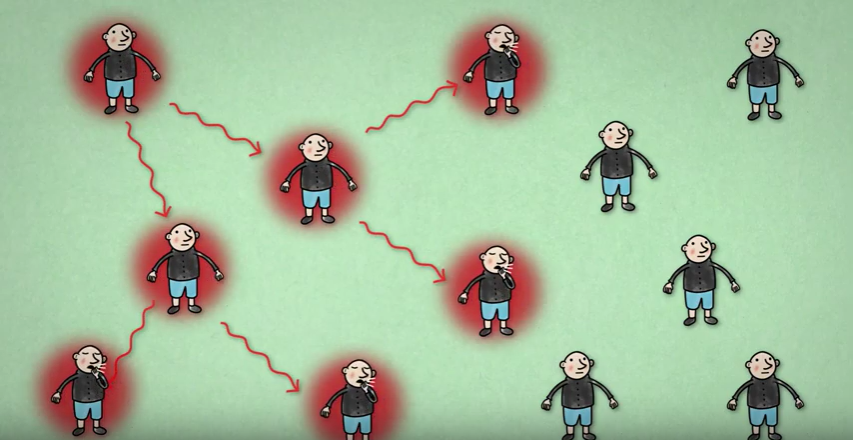 then each infected individual will infect on average two other individuals. This picture is part of a video made by Bruno van Wayenburg.

measures the average number of additional infections per infected person in a population living under its normal circumstances where no additional measures, like vaccination, social distancing or home isolation, are implemented. It is important to mention that

may vary for the same virus in different populations. For the case of COVID-19 this is explained nicely in this video.

can change as measures are implemented, as more people become immune, etc. The Effective Reproduction Number thus quantifies the effectiveness of additional measures and varies in time. We can think about it in the following way: When a virus enters a population we have that

. Afterwards measures are being implemented which aim at decreasing

after some time. Hence

measures the average number of additional infections per infected person at this moment of time after measures have been implemented.

Measures like social distancing can lower the value of

, thus effectively halting the spread of the epidemic. Let’s have a closer look into how

In epidemiology, the basic reproduction number of an infection, denoted

zero”, can be thought of as the expected number of cases directly generated by one case in a population where all individuals are susceptible to infection.

is not a biological constant for a virus, as it is also affected by other factors such as environmental conditions and the behavior of the infected population. For example, in a very densely populated region

will be higher compared to a population that is less densely populated. The most important use of

lies in determining whether an emerging infectious disease can spread in a population and go `viral’ or `pandemic’. For this, one needs to determine what proportion of the population should be immunized through vaccination to eradicate a disease.

In commonly used infection models, when

the infection will be able to start spreading in a population, but not if

. Generally, the larger the value of

, the harder it is to effectively control the epidemic.

The basic reproduction number is affected by several factors including the duration of infectivity of affected patients, the infectiousness of the virus, and the number of susceptible people in the population that the affected patients are in contact with.

We start by explaining the role of

in the simplest possible scenario. Suppose that

. Then every infected person infects

other people. Thus, one initial case will infect

other cases, who will infect

further cases, who will infect

more cases, who will infect another

cases, etc. The number of infected will then grow as follows:

This is called exponential growth. You can see that this grows like crazy, and the pandemic is very hard to control and maintain. In the figure on the right we also plot these numbers to see how they grow. Of course, eventually the spread will have to slow down, because after more than

steps, there are more infected people than inhabitants in the Netherlands. But with an

, a huge part of the population will quickly receive the disease, and thus many deaths will follow. Thus, it is of crucial importance to limit the average number of additional infections per infected person. 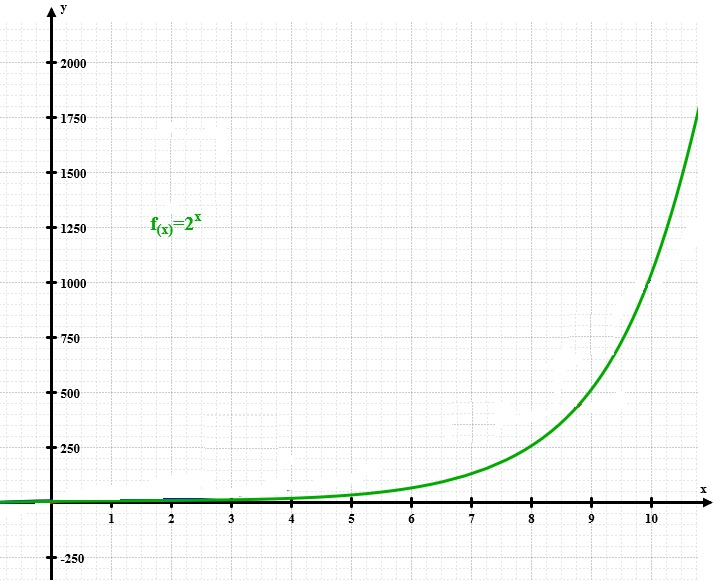 Above we have assumed that one knows what

really is. However, the world is unfortunately not so simple. Although seemingly simple,

is a very delicate concept and is usually estimated from rather complex mathematical models that depend on estimations and the context in which an epidemic takes place. Thus, one needs to carefully take the data of the number of infected, the number of people in hospitals, etc. into account to be able to reliably estimate what

is. Let us explain how this is done by our own RIVM (The Dutch Institute for Public Health).

in terms of three factors. The first factor is denoted by

represents the average number of days that an individual stays infectious. Further, the second factor

represents the average number of contacts that an individual has per day, where

represents the fraction of the population that is susceptible to the virus. Finally, the factor

represents the probability of infection when an infected individual comes in contact with a healthy susceptible individual. Using this information, we obtain the formula

We see that a high

is a complex mix of various parameters that are in general rather hard to estimate. For a virus we have limited power in affecting

, these depend on the nature of the virus itself. For policy makers, it is crucial to note that

depends purely on human behavior that we can influence by appropriate restrictions.

Thus, controlling the spread of SARS-CoV-2 boils down to limiting

, from the moment we start implementing measures to reduce

but with a varying 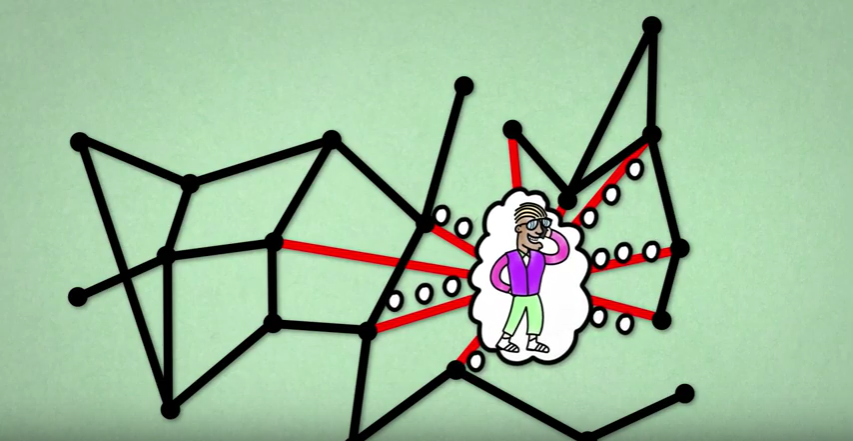 Individuals with a lot of contacts, hence high

may also infect a lot of other individuals. This picture is taken from a video made by Bruno van Wayenburg.

What do we know about these factors for the case of SARS-CoV-2? According to the European Centre for Disease Prevention and Control (ECDC) the factor

is estimated to be between 3 and 10 days. According to the WHO it can even climb to up to 14 days. For the SARS-CoV-2 virus the basic reproduction number

has been estimated to be between

when no measures are in effect. The ECDC estimated it to be equal to

. This means that without any measures to prevent spreading of the virus it will spread like wildfire in the population, as we have seen happening in the initial stages of the pandemic. Thus, controlling

remains to be of vital importance.