Large international companies often do not send their profits directly from one country to another. Instead, they send it via other countries, so-called conduit countries, to reduce the tax they pay. Which countries are the most important conduit countries? To investigate this, the CPB (Netherlands Bureau for Economic Policy Analysis) has collected and has analyzed data about tax streams worldwide

, algorithms were implemented (and discussed from a mathematical point of view) that help to analyze this data, leading to some extra conclusions. In this article we describe some methods that have been used, and the results that this led to. How important is The Netherlands as a conduit country?

The dataset of the CPB consists of

countries/jurisdictions, and the tax rates that a company must pay when sending money from one country to another. The countries in the data set are colored green in the figure below.

In order to model how these taxes are paid by companies, we use a graph

countries from the dataset, and the set

contains arcs of the form

which indicate that a company can send money from country

. Suppose that a company wants to send a profit from country

, the United States of America, to country

, The Netherlands. The company might have to pay some tax to do this, because of bilateral tax treaties between the two countries. We write

. This means that the fraction of profit that a company has left after this transfer, can be written as

As an example, suppose that a company wants to transfer one million dollars from the United States of America to The Netherlands, and that it has to pay 10% of taxes. This means that afterwards the company has

represents the USA, and the parameter

. See the figure below for an overview of the situation. 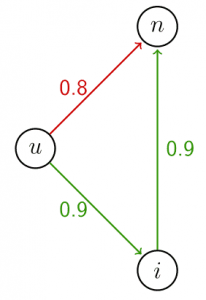 of the profit is left in India. The example shows that a direct route for sending profits between countries is not always the most profitable route. Companies can use indirect routes to reduce the amount of tax they pay. This is called tax treaty shopping.