Degrees in graphs III: Which degrees sequences are possible?

In previous article, we discussed what the degree sequence of a network or graph is. Recall that a graphical sequence is a sequence of degrees that can occur in a (simple) graph. Erdős and Gallai developed a beautiful criterion to decide precisely when a degree sequence is graphical. In order to describe the Erdős-Gallai criterion, let us introduce some notation.
We denote the number of vertices in the graph by

, and number the degrees of the vertices by

. This means that vertex 1 has

neighbors, etc. We may assume, as in part 2, that the degrees are ordered from large to small, so that

is the largest of the sequence

be an integer in between 1 and

. Then, the Erdős-Gallai criterion requires that, for all such

largest degrees then this cannot be more than

plus the sum of the minimum of

, summed over the vertices that do not have the

Let us work this criterion out in some examples. In part 2, we showed that the sequence (3,3,1,1) is not graphical. Take

. Then, the left hand side of \eqref{Erdoes-Gallai} equals

. Thus, the inequality in \eqref{Erdoes-Gallai} does not hold for

, as it should since (3,3,1,1) is not graphical. Note that the inequality is correct though for

, so it is necessary to check the inequality for every

. We leave it to the reader to verify that the Erdős-Gallai criterion indeed does hold in the simple graph on 7 vertices below: 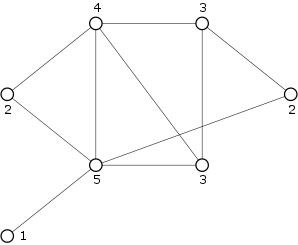 The Erdős-Gallai criterion looks a little mysterious. One way to see its relevance is to note that the term

vertices in the graph. This total degree consists of the edges between themselves, of which there are at most

, together with the edges to the other vertices.
There can be at most

edges from any vertex

vertices. Also, there cannot be more than

vertices. Thus, there can be at most

vertices, and summing this out over all vertices

that are not in the first

vertices gives that there are at most
\begin{equation}
\sum_{i=k+1}^n \min(k,d_i)
\end{equation}
edges between the first

vertices and the other vertices. This shows that the Erdős-Gallai criterion in \eqref{Erdoes-Gallai} certainly needs to be true for any graphical sequence. However, it also sheds some light on how to produce a graph for any degree sequence that is graphical. If we can do this, then indeed the Erdős-Gallai criterion in \eqref{Erdoes-Gallai} ensures that the sequence

The proof that \eqref{Erdoes-Gallai} is really also necessary is more tricky, and will not be given here. However, we can illustrate how to construct a simple graph with the given degrees. We do this by connecting the edges one by one. Choudum [1] provides a proof by mathematical induction on the sum of the degrees: he lets

(or the penultimate number if all are equal), uses a case analysis to show that the sequence formed by subtracting one from

and from the last number in the sequence (and removing the last number if this subtraction causes it to become zero) is again graphic, and forms a graph representing the original sequence by adding an edge between the two positions from which one was subtracted.

From a practical perspective, it is also of interest how one can obtain or create a graph with the given degrees when the Erdős-Gallai criterion gives that there is one. The Havel-Hakimi algorithm is a very simple way to produce such a graph. In this algorithm, one again orders the vertices according to their degrees as

. Then, we connect the

edges of the vertex with highest degrees to the

other vertices of maximal degree. Repeating this step (including the necessary reordering of the degrees) produces a simple graph precisely when the degree sequence is graphical. The Havel-Hakimi algorithm is thus is very simple implementation of the Erdős-Gallai criterion.