Can flipping the queue spare you time?

How would you react if we would tell you that serving the last customer in the queue in beneficial?

Imagine that you are standing in line, waiting already for several hours, looking at the doors of the Ziggo Dome, hoping that they open soon so that you can see your favorite musician from the first row of the pitch. Another fan, who clearly did not wait as long as you walks besides the queue and joins in front of you at the beginning of the queue. What would your reaction be? 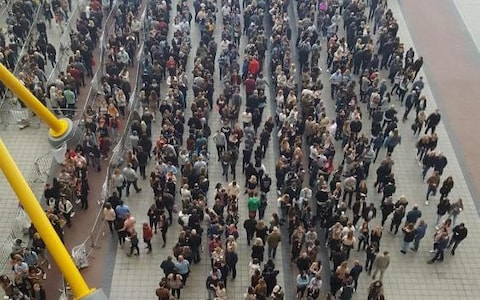 People queue without barriers at an Ed Sheeran concert at the O2, London

Everyone would agree that this situation is unfair – though the reactions may differ. Two Danish researchers recently argued that actually, it is a better idea to let the person that arrives last be served first. They did so in an article about the curse and disadvantages of the first-come first-served (FCFS) service order. [1]

If they are right - and can convince other people of this - that would mean that at the next concert everyone that arrives later than you is joining the queue in front of you. Are we to expect this?

To answer this question we have to learn more about the conclusion and assumptions made by the Danish researchers. They state that last-come first-served (LCFS) leads to smaller average waiting times, under the assumption that the arrivals will change when changing the serving order. Here, the waiting time is the time between arrival and the moment the facility opens. Their argumentation is that if the service order is FCFS people tend to arrive early in order to be served first, which increases the waiting times. However, when the order of service is changed to LCFS the contrary happens. People tend to arrive late in order to be served first and this decreases the waiting times.

Moreover, the FCFS order is considered more fair than the LCFS order and therefore, theoretically, FCFS has the best tradeoff between fairness and average waiting time. Which is one of the reasons why we observe this service order a lot in practice, think for example of supermarkets, ticket selling, etcetera.

The conclusion in the article is therefore exclusively valid in situations where the arrivals are not the same for the different service orders. More specifically, they argue that this is the case in situations where it is only possible to enter after the facility opens. Examples are concerts, people waiting for the new iPhone or passengers boarding a plane at the airport.

So, at the next concert, will everyone who arrives later than you indeed get to go in first? No. For two reasons:  Firstly, the article does not take into account the fairness of the service order. LCFS is considered to be less fair than FCFS. This can be solved to give a certain reward to the people that arrive early. The second more important reason is practicality. While the LCFS service order may work theoretically, in practice it is hard to implement this service order. When someone arrives early this person can wait outside the line and join the queue just before the doors open to benefit from this service order and if everyone does this it is really chaotic.

To conclude, when you want to stand on the first row of the pitch you still should arrive earlier than all other fans.