Traffic lights no longer needed: back to the future

Traffic lights are currently an annoying but inevitable part of traffic. With the introduction of self-driving cars however, can we avoid having to wait for a red light ever again?

Traffic in the past: what was done and what can we learn?

In order to get a feeling for some good strategies, we first take a look back in time.

Until the end of the 19th century, no traffic lights were implemented at all. How did they deal with traffic then? In general, there were some rules to which you had to abide, but besides those, everyone could do whatever they liked, which sometimes led to chaos. This is not something we should want to go back to: typically it would even increase the number of traffic jams, as is the case when traffic lights are down nowadays (even though the traffic lights might vanish with the introduction of self-driving cars, we do not go back to this chaos; the future is much brighter).

At some busy intersections, traffic police officers were controlling the traffic, for example in London in the 18th century. Their task was to organize the traffic in an orderly fashion. They had to enforce that the traffic “kept left” for example. (This might very well have been a reason why traffic in Britain drives on the left side of the road, as before this was not necessarily the case.) Later on, more tasks were added, such as deciding when each vehicle should cross the intersection and traffic controllers were employed more often. 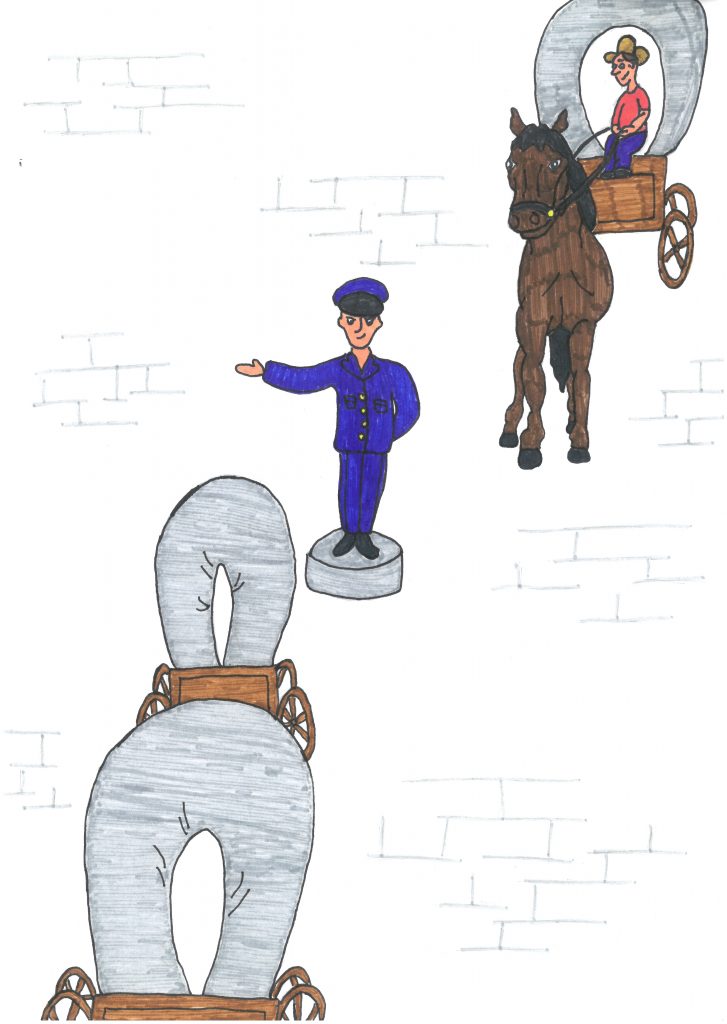 Since the introduction of traffic lights at the end of the 19th century, traffic lights have replaced the common traffic controller at many places. Traffic lights are nowadays able to deal with traffic quite efficiently. In some sense, they do the same job as traffic controllers do: they decide when each vehicle is allowed to cross the intersection. Using for example detectors in the road, they can estimate how many vehicles are waiting to cross the intersection. To some extent, they can use this information to adapt their scheduling (by extending or shortening the green period for certain lanes). 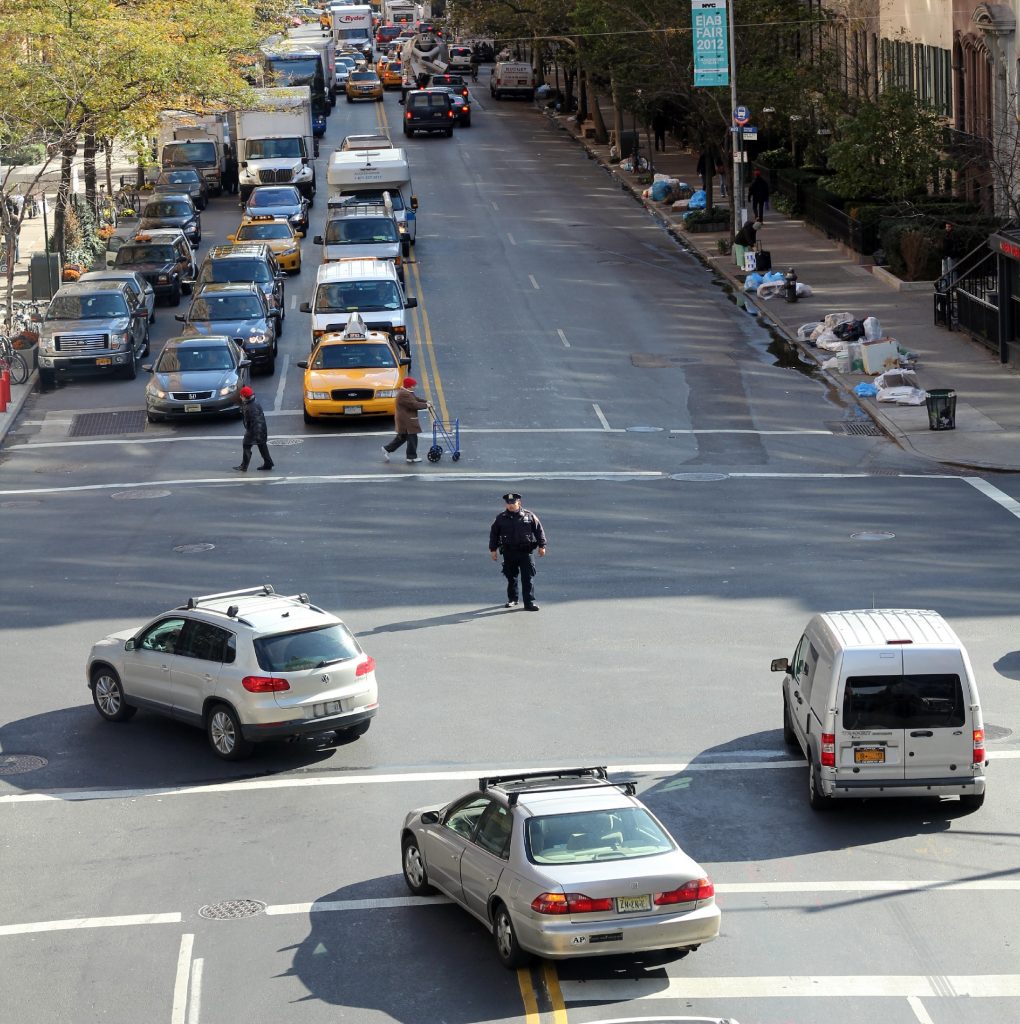 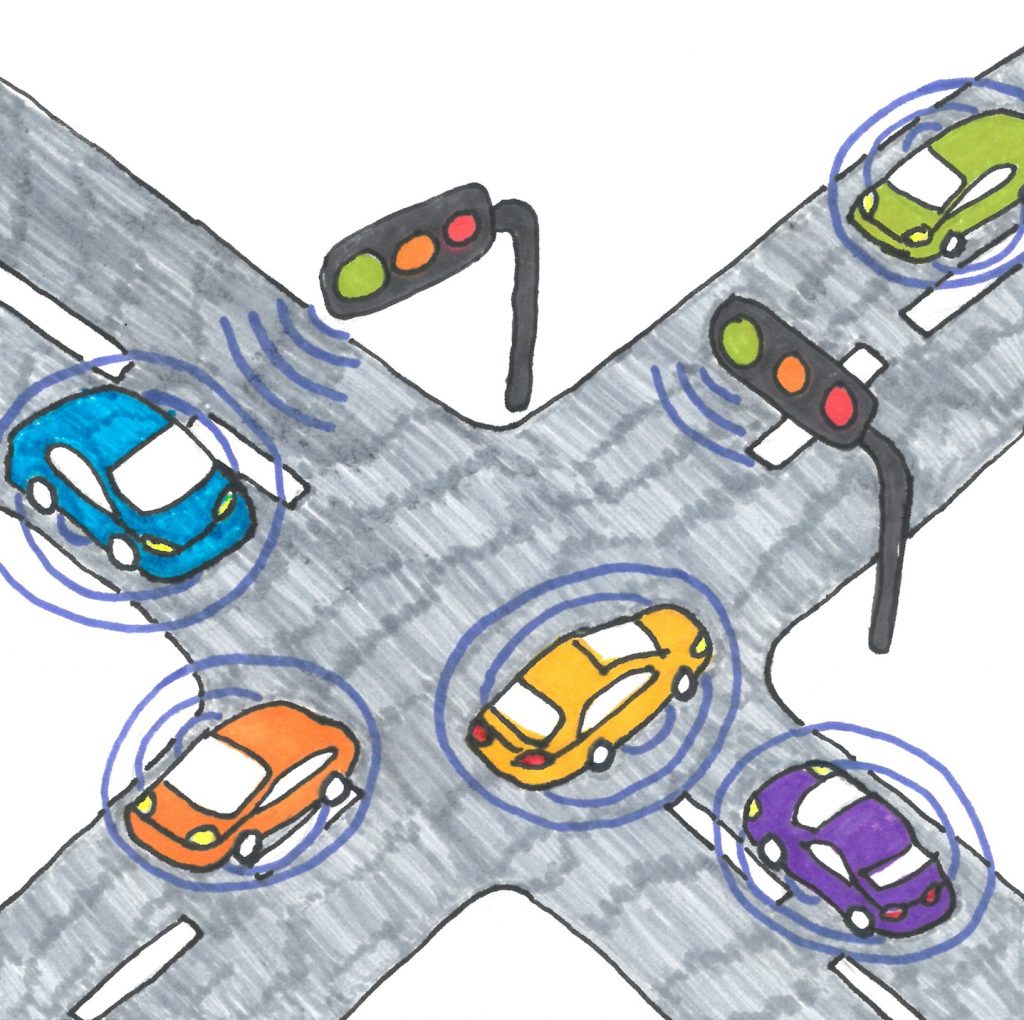 To some extent, this idea is already being put into practice. In Helmond (the Netherlands), several intelligent traffic lights are installed, which can communicate with “usual” cars with some additional equipment, so-called connected vehicles. Also here, anticipation on the actual traffic is the key to reduce congestion. According to simulations for the Helmond example, congestion can be reduced by more than 20%! For the setting with self-driving vehicles which we are looking at, an even higher reduction of the congestion than this 20% can be obtained, based on simulation results!

In the Helmond example, the connected vehicles also receive a speed advise, based on the current traffic situation. The virtual traffic controller knows when the vehicle is allowed to cross the intersection and communicates this to the vehicle, resulting in a speed advice. If you follow this advice, you are at the right time at the intersection and, ideally, do not have to stop.

This idea reduces pollution, as less deceleration and acceleration is needed! This is good, as in some cities you cannot put your hand at the window frame with your hand getting black because of soot caused by emissions of cars. And in other cities the exhaust gases cause such a lot of smog that you can barely see anything, day after day.

For cyclists this idea of giving a speed advice is already used. For example in Amsterdam, you will hit a green light for a series of traffic lights (a so-called green wave) at some places if you drive between 15 and 18 km/h! 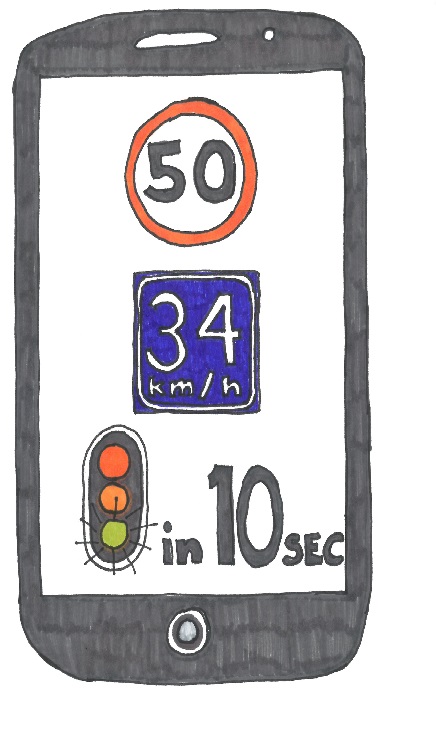 Let’s see in the figure below how this would work. We see two streams of vehicles (represented by the red and blue arrows) driving towards an intersection. The intersection is at the middle of the figure. The arrows represent individual vehicles. We see that there are no collisions, as none of the arrows cross each other, which is a good thing to start with! Moreover, vehicles are grouped together, as there are many arrows of the same color (and therefore originating from the same direction) close to each other. Combining vehicles driving in the same direction in groups reduces the number of switches – which is a good thing as discussed before. The steepness of an arrow corresponds to how quickly a vehicles drives, so we can see the deceleration and acceleration that each vehicle performs. For example, the first red vehicle on the left, starts decelerating when it is fifty meters away from the intersection, then cruises at a constant speed for some time and then accelerates at a ten meters distance from the intersection. We see that none of the vehicles has to stop, which is good if we want to reduce pollution!

Employing the ideas described above, the congestion at intersections might be decreased considerably. Moreover, the pollution will be way less than it is nowadays. The traffic lights that were invented in the 19th century to replace traffic controllers are not needed anymore if we introduce the virtual traffic controller and when self-driving vehicles are occupying the roads. Then, we will go back to a situation where a traffic controller organizes the traffic as happened (to some extent) in the 18th century in London. After all, even though traffic controllers cause quite some frustration from time to time, they can actually do quite well, certainly when self-driving vehicles are driving around. Better than traffic lights currently can do.