The networks game is online and ready to be used! Thom Castermans and Martijn Gösgens from the Tu Eindhoven developed this game for the study day of the Dutch Association of Mathematics Teachers, which was held in November 2020 and had as a theme networks. The goal of the game? To show how percolation works on a network created by the people participating in the game!

Percolation theory is a branch of mathematics at the interface between probability theory and graph theory. The term 'percolation' originally comes from materials science. In mathematics, percolation is regarded as the process of randomly removing connections in a network. The easiest way to do percolation is to toss a (potentially unfair) coin for each connection and remove the connection at the head. People are then interested in what the resulting network looks like. In this game users first create the network and then perform percolation on it.

Below you can find all the instructions to set up and play the game.

When you click on the plus button you will receive a password, this is your private admin-password. You will also see that your game is added to the list of active games. All games are publicly accessible, everyone can join all games that are on this list. After one week all "classrooms" will be deleted. If you want to make a classroom that will stay longer contact us at editor@networkpages.nl.

The password for your game will appear on the top and the classroom will be added to the list.

Step 2 (Playing the game): After creating a "classroom" people can freely join and add nodes to the network in that game. Just click on the game where you want to participate. When you enter you will see a page with instructions and a network. At the beginning the network has only three nodes but as people start adding nodes it grows larger. The new nodes that will be added will appear in your browser automatically. To add your node click on two existing nodes in the network, give a name to your node and then click on "add node". This will add a node to the network and connect it to the two nodes you chose. Each node can be connected at most to five other nodes.

Step 3 (Control page and perform percolation): The admin of the game has access to an admin/control page. Here you can reset the network or perform percolation. If you perform percolation then edges will start disappearing, for each edge a virtual coin will be flipped and the edge will be deleted with a probability of 0.5. After doing this for the whole network a new percolated network will appear. The nodes in the largest connected component will become green. The percolated network will automatically appear on the browsers of all users who are in the classroom and can see the network.

The first button on the right in each game leads to the admin/control page. You will need your password to access it. 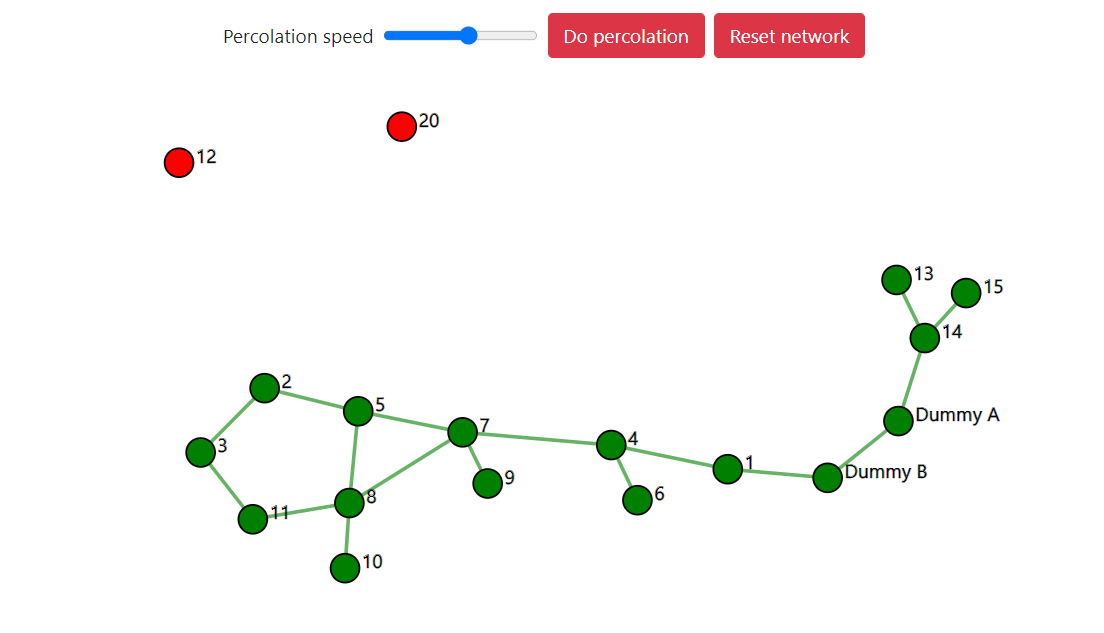 The admin/control page after performing percolation.

Goal of the game: Ideally the game is played with a group of ten people or more. The goal is to try and add your node to the network in such a way so that after performing percolation your own node will be in the largest connected component of the network, meaning in the cluster containing most of the nodes. Since links are removed with a probability equal to 0.5 it means that you can never make entirely sure your node will be in the largest component. But there are strategies to increase the probability of winning!

If you have any questions or suggestions for improving the game feel free to contact us at editor@networkpages.nl.