My favorite muesli contains cranberries, raisins and oats. But what do other people like to eat in their muesli? A muesli network gives the answer!

The German company mymuesli.com lets people compose their own muesli choosing from different ingredients. The German researcher and data visualizator Moritz Stefaner investigated what these muesli ingredients look like as a network. The illustration below shows all possible muesli ingredients that can be ordered online. The larger the name of the ingredient, the more popular it is. An edge indicates that two ingredients are sometimes ordered together in muesli. The thickness of the line shows the popularity of the combination. This transforms the muesli you eat for breakfast into a real network. 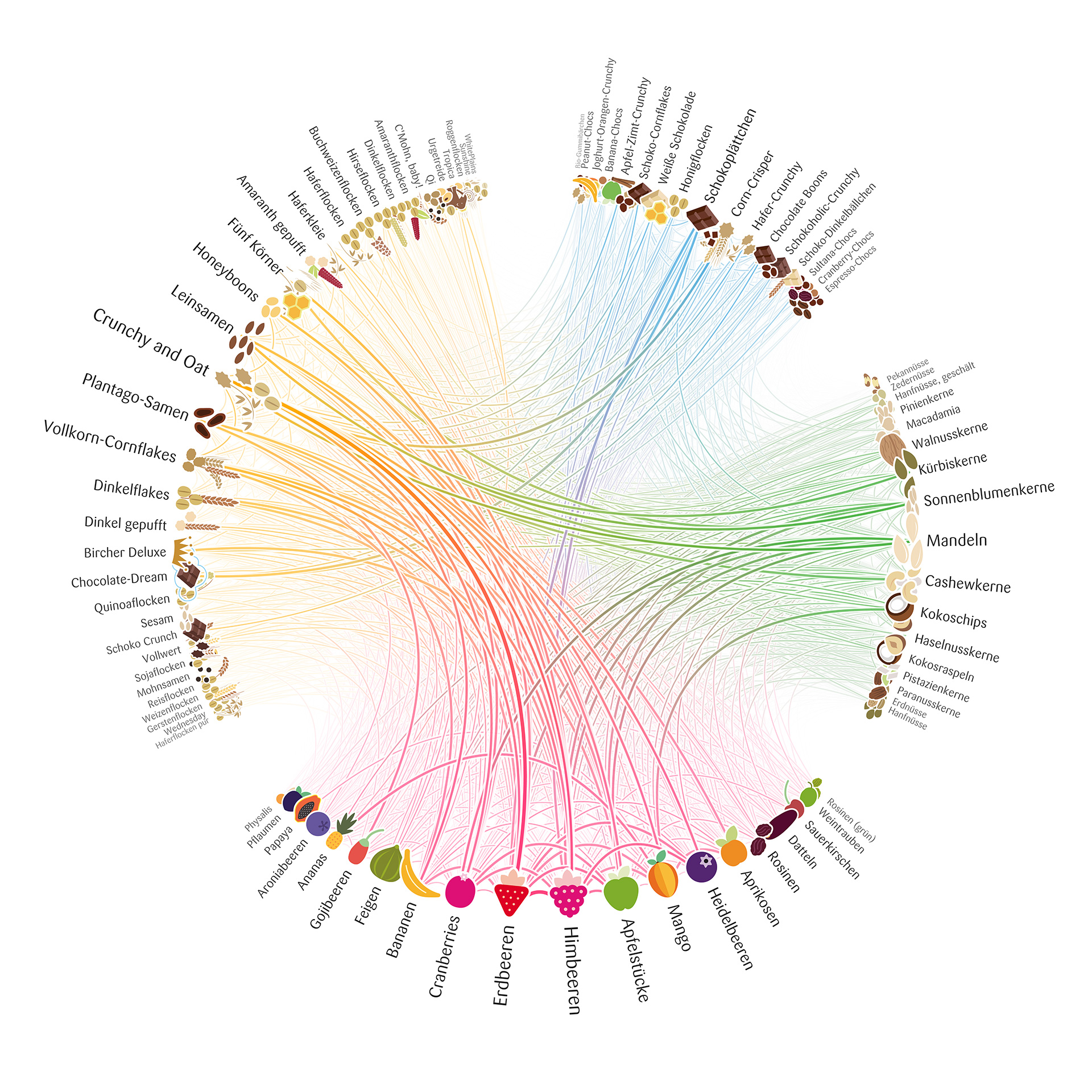 This beautiful picture also contains many interesting observations. First of all, the picture makes me jealous of all Germans who are able to order ingredients like 'Wednesday', 'C'mohn baby!' and 'Sunshine' in their muesli. Still, these are not the most popular ingredients. Out of all eighty possible ingredients, some are very popular, like strawberries, almonds and chocolate. However, most ingredients are bought only rarely. My own favorite muesli of cranberries, raisins and oats is apparently not very popular in general.

In my opinion, one of the most interesting things about this network is that it looks very much like the network of my Facebook friends: 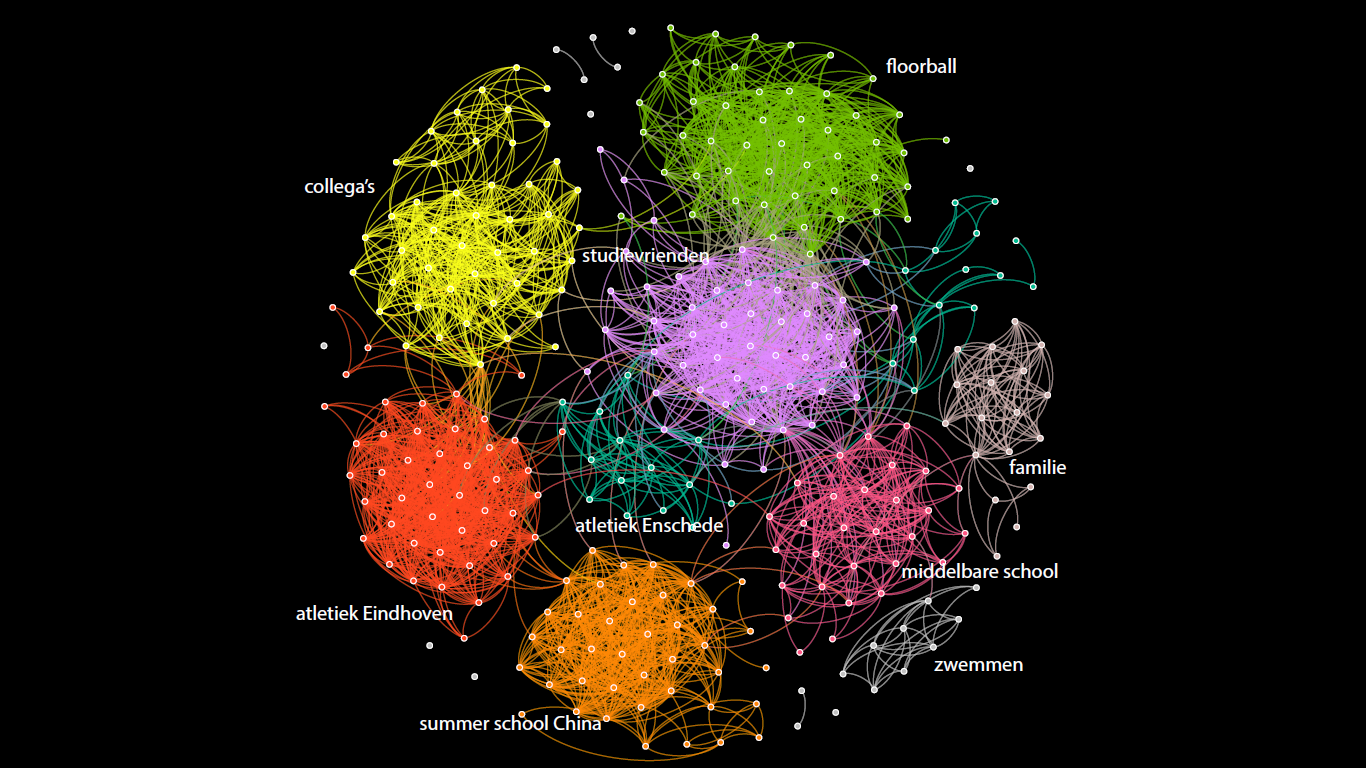 Another similarity between a muesli network and a network on social media is the community structure. In the muesli network it is easy to recognize these communities: fruits are often ordered together, so they form a community. Nuts, grains and chocolate ingredients from the other communities. In my Facebook network similar community structures exist, and they are indicated by the different colors. My family forms a community for example because my family members have many Facebook connections between them. 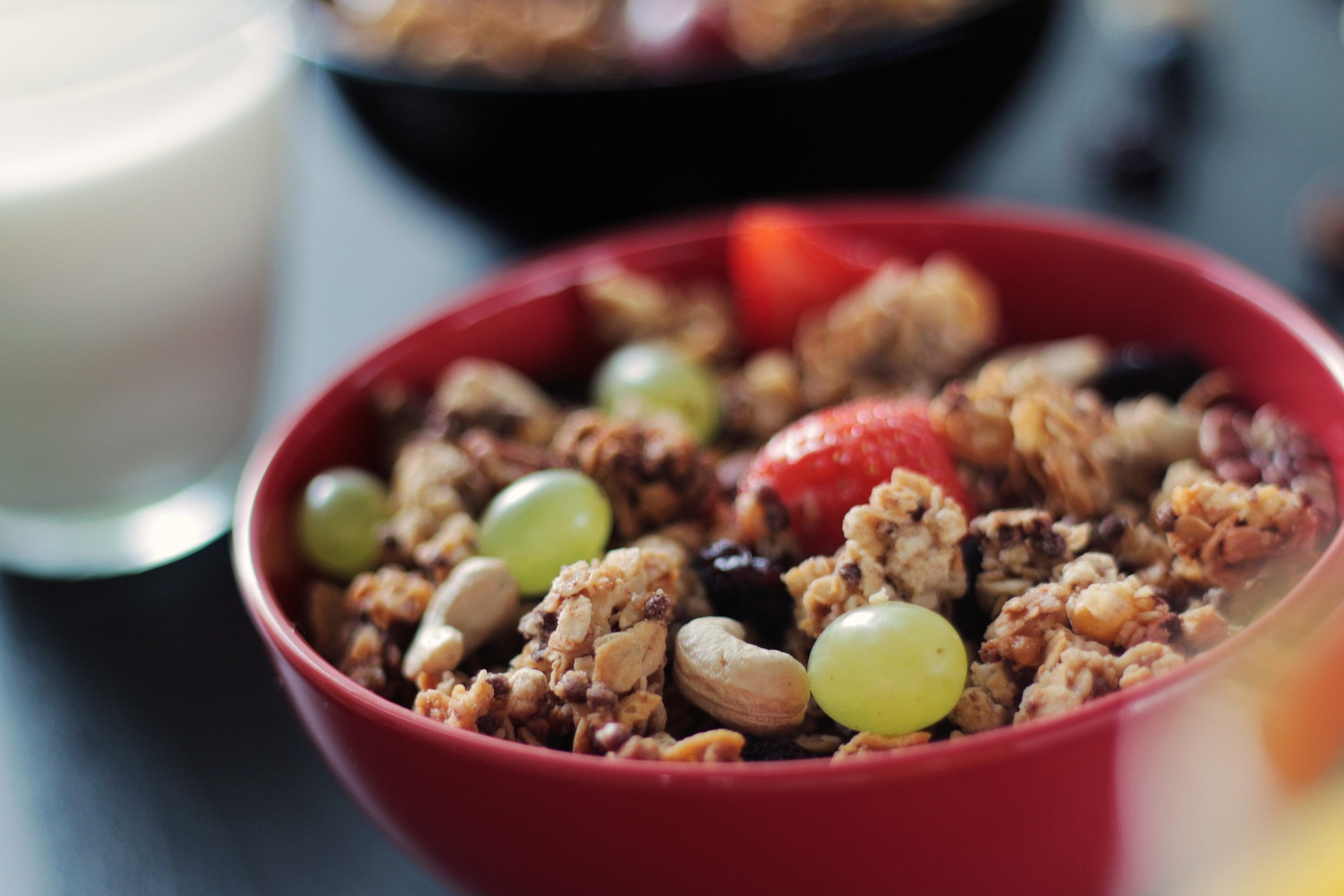 It is quite coincidental that these completely unrelated networks are still so alike. But it gets even more interesting: many other networks we study are also very similar to the muesli network and the Facebook network. They contain popular and less popular nodes, and they contain community structures. These networks range from networks of movie actors, networks of computers to even networks in your brain.

This is why a lot of research focuses on networks that show these two properties. Mathematicians look at these networks in a very abstract way, by just looking at the edges and the nodes. It does not matter whether these nodes are muesli ingredients, Facebook friends or famous actors. The good thing is that by forgetting the exact meaning of these nodes, you can draw conclusions about all these different sorts of networks at the same time. In this way, an abstract network may help to predict which messages will go viral in social media, but also what the most favorite version of muesli is.

This text first appeared in Dutch on Faces of Science/Kennislink.