Not all jet-lags are the same

Why you are jet-lagged longer when flying from New York to Amsterdam than the other way around.

A story of  discovery, driven by personal experience, mathematical innovation and interdisciplinary collaboration 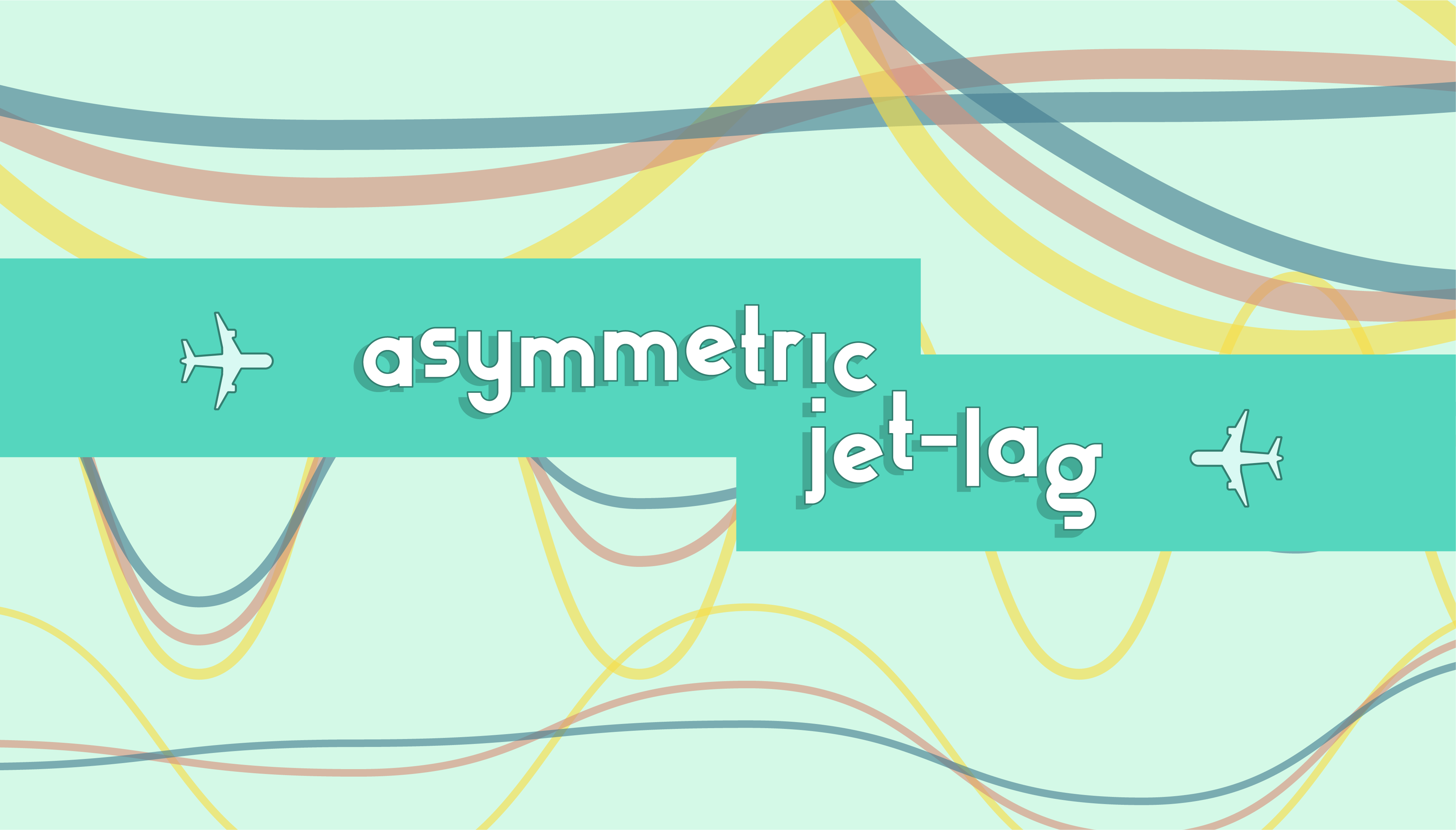 Illustration made by Alex Nazlidis.

Recently Ada, a mathematician familiar with network theory, experienced a curious phenomenon. She had planned to attend a conference in New York over a long weekend between two weeks with a high teaching load. When she arrived at the conference, she felt jet-lagged for the first couple of days, but soon adjusted and was able to participate with gusto for the rest of the conference. After returning to Amsterdam she was exhausted, but as expected was unable to sleep due to the time difference. The teaching, which she usually enjoyed, depleted her of her last energy and she went to bed feeling drained every night. Yet, unlike in New York, she was not able to sleep after a couple of days and felt jet-lagged for the entire week.

Ada had previously heard about this asymmetric jet-lag recovery but wasn’t aware of an explanation. The following weekend she met up with Bertrand, a friend and collaborator of hers from the neurophysiology department, for a coffee in the buzzing city center of Amsterdam. From him, she heard that this phenomenon was partially, but not completely understood.

Bertrand explained that the part of the brain that controls the sleeping cycle is made up of two groups of neurons. In order for you to be able to sleep at night, the activity of these neurons needs to be synchronized with the cycle of the sun (e.g. active during the day and inactive at night). When you abruptly change the cycle of the sun (by flying to New York) these two groups need to re-synchronize to the new sun-cycle.

For some unknown reason, this delay depends on the way you shift the sun-cycle. By flying to New York in the morning, you essentially lengthen the day that you experience, on the other hand, flying back in the morning would shorten the day. The delay was also different for different people. Old people had much more trouble re-synchronizing than young people.

Ada was intrigued. She had heard of a mathematical model used to study synchronization (the Kuramoto model), which had been applied to understand a variety of phenomena like the synchronous flashing of fireflies or the functioning of power grids (you can have a look at the book written by Steven Strogatz on synchronization if you are interested). She started telling Bertrand about this model and they decided to see if it could be adapted to understand the asymmetric jet-lag.

The mathematical model, when applied to the neurons, supposed that all neurons tried to synchronize with all other neurons equally. This meant that it had to be modified in order to capture the two groups of neurons that Bertrand had told Ada about.

They spent many sessions in front of a whiteboard discussing the best structure to introduce to the model in order for it to capture the essential structure of the two groups of neurons. The restriction was that the model should not become impossible to analyze.

A representation of the original model, where the state of the neuron and its type are encoded by a point on the circle and an angle. The gray lines show the interactions between the neurons. This model does not have the group structure Bertrand told Ada about.

The basic model applied to the neurons predicted that the delay in re-synchronizing with the sun-cycle would be the same no matter how it was changed. This was because the first group would synchronize to the sun and then, since all the interactions were the same, the second group would lag behind the first group by some constant amount.

But by including the two groups (and therefore the four types of interactions), suddenly the model was capable of much more complex behavior. Now instead of the second group just slowly synchronizing with the first group, it was possible that the second group would first have to desynchronize completely (i.e. go out of sync) before being able to re-synchronize with the first group. Ada realized that if this was only possible when the sun was shifted in the way corresponding to flying back from New York, this might explain why the re-synchronization takes longer in this case. The model also showed that weaker interactions between neurons made it more difficult to re-synchronize.

Excited by her discovery, Ada contacted Bertrand to share her new understanding. The mathematical formulas were complicated and Bertrand’s experience with mathematics was limited so that it took some  time to communicate her result (If you are interested in the details of this discussion, they are explained in this article). Eventually, they understood each other and Bertrand agreed that this was an interesting finding. 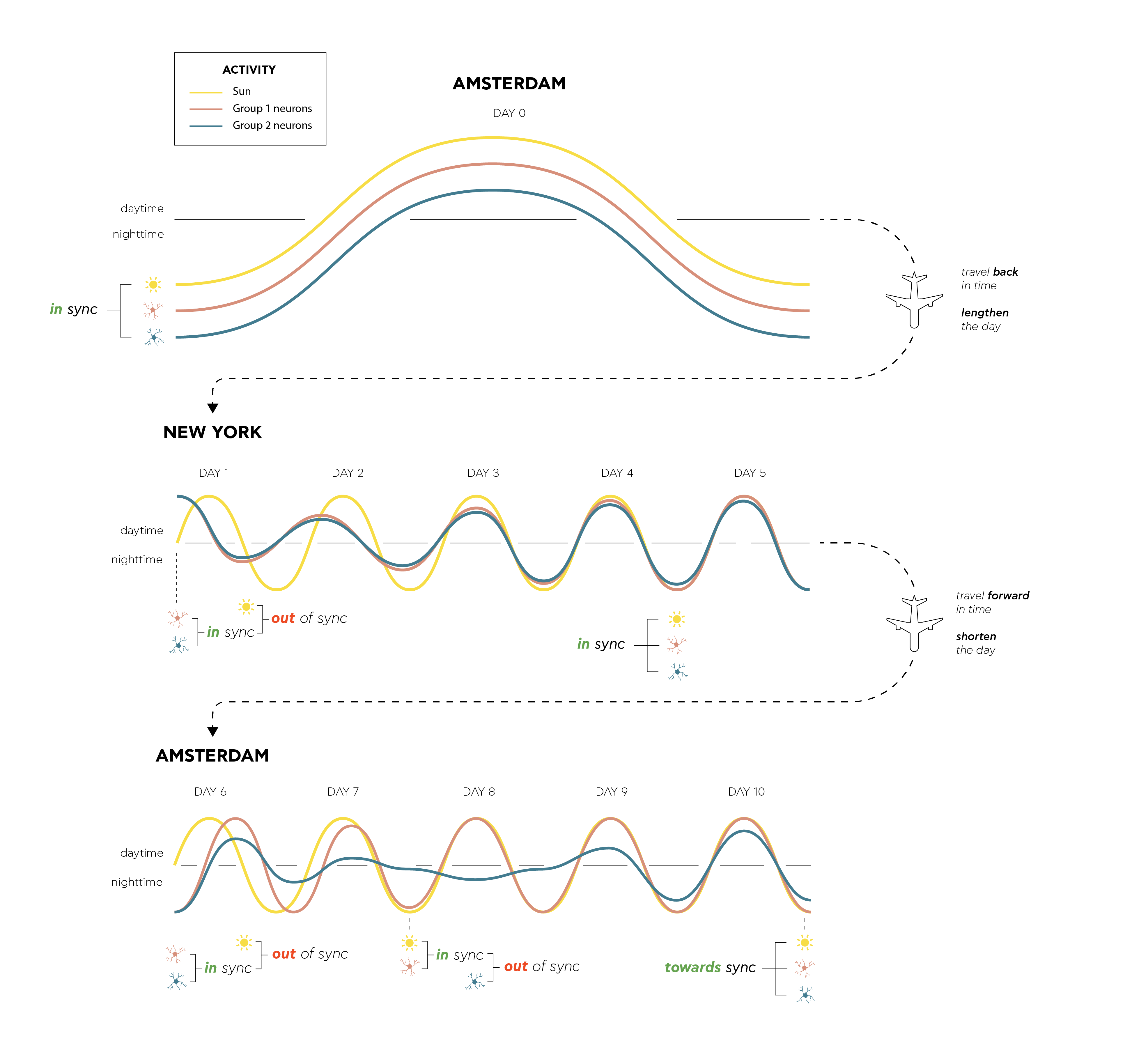 Sadly, Bertrand told Ada, the experimental techniques were not yet capable of making the measurements that would be able to confirm that this was the mechanism by which the asymmetric delay arose. To test the hypothesis about jet-lag they would have to be able to measure single-neuron activity during the transition (after the phase shift), while currently it is only possible to measure these in equilibrium.

As is common in science this is not a reason to accept the model, but enough of a reason not to reject it just yet. Ada and Bertrand continue to explore the implications of this new mathematical model, while they wait for the technical capabilities (and the inevitable slew of paperwork to be done for experimental approval) to be able to test it properly.