No winner without a second place

When you browse the internet a lot of websites show you banners with advertisements. And if you reload the page some new flashy advertisement pops up in the same place.

The websites do this to earn money usually to sustain themselves. In the early days of the internet websites made deals with advertisers such that the advertiser was allowed to display their banner for a certain period of time on the website. But in the late 2000's a new way of selling advertising space made an introduction: Real-Time Bidding (RTB).

While your web page is loading an auction takes place. For this the web page uses a supply-side platform (SSP). An SSP is a platform that specializes in handling the filling up of advertising space so that the web page owners do not have to worry about the technical details. The moment you request a web page a notification is sent to the SSP with some information about you. Usually it is just your IP address, but sometimes due to tracking cookies more information about you is known.

When the SSP receives a notification it will start an auction. First it will send notifications to demand-side platforms (DSP) that are connected to the SSP. Just as SSPs handle the technical part of the procedure for web page owners, DSPs handle the technical aspect for clients that want to advertise. Based on how well your characteristics in the notification match with the target audience of the advertisers they determine a bid which the DSPs send to the SSP.

One fifth of a second

The SSP reviews the bids it received and based on these it determines a winner and a price. The winner is now allowed to display their advertisement on the web page you are looking at. This whole process, called Real-Time Bidding (RTB), takes place in about 200 milliseconds, one fifth of a second. It barely affects the loading time of the web page.

Since the start of RTB in the late 2000's until 2019 the auction format was that of a second-price auction. Contrary to what probably first comes to mind when thinking about an auction, the winner of the auction does not have to pay what they bid. Instead, the winner has to pay the second highest bid.

Let us take a look at a toy example to see the difference between the first-price auction, where the winner pays what they bid, and the second-price auction.

Suppose there is a banner space available at the network pages and while you are waiting to see if there are some new awesome articles available the SSP, of which the network pages is then a hypothetical client, starts an auction. There are four bidders: Leo who sells laptops, Candy selling candy bars, Eric selling electric bikes and Holly selling holidays. Some advertisers are more eager to advertise than others and are willing to spend more money, we say that each of them has some value for the advertising spot.

Since you are reading the network pages in an older browser Leo thinks you have a good chance of being interested in a new laptop and thinks the advertisement spot is worth 10€ euros to him. To digest all this difficult information from the network pages you need brainfood. Candy knows this. She thinks your ad is worth 9€ euros. Because your profile looks like the one of a young person Eric is not valuing you very high with 3€ euros and in these corona times the budget for holiday sellers is very limited and so Holly only values the ad at 1€. In reality you should think of these numbers as being divided by 1000. 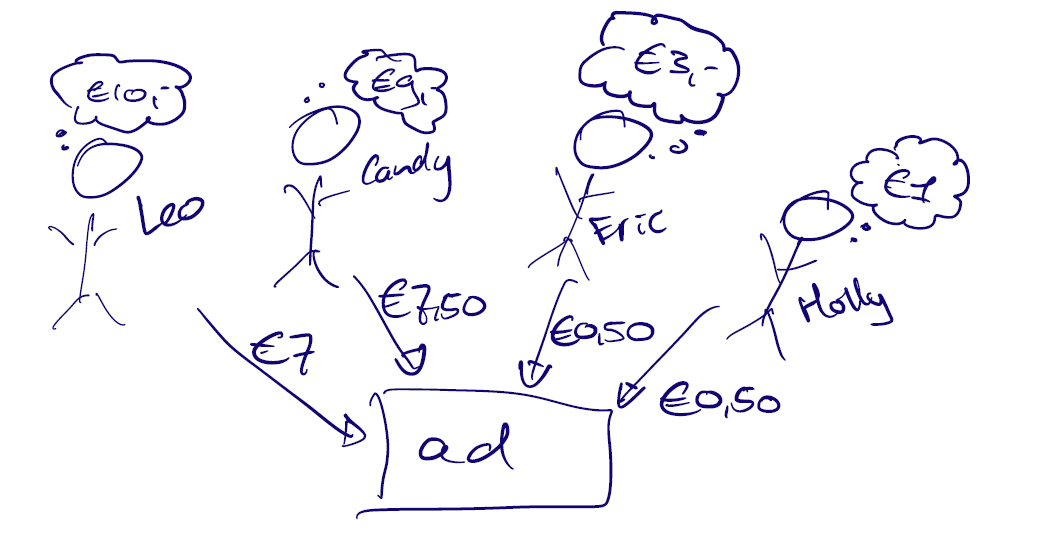 Suppose we have a first-price auction where the winner pays what they bid.

Why has the second-price auction instead of the first-price auction been the auction format for online advertisement auctions for over 10 years?

The example already reveals one of the main problems of a first-price auction. It is not clear at all how to determine how high your bid should be. Not too high because then you do not earn anything. If something is worth 5€ to you and you pay 5€ then you might as well have saved yourself the effort of buying it since you did not gain anything. But also not too low because then you might lose the auction even though you are the one valuing the item the highest of all bidders. This happened in our example with Leo. He was too conservative which gave Candy the opportunity of winning the auction.

Especially in the online setting where there are many auctions in a row, algorithms will automatically try to find this better price. So when you win, you are going to bid lower in the next auction, while if you do not win you are going to bid a bit more. At some point this will change the result so then the opposite will start happening. If your competitor starts doing this they will get an advantage, so you will have to join this battle. It makes it harder to participate in the auction and what will happen in the auction is also less predictable.

A beautiful property of the second-price auction is that the outcome of the auction will never be better for you than when you bid your value for the item. To see this let us take a look at our example again.

This observation holds in general, whatever the values of the bidders and the bids are, changing a bid to their value never makes the player unhappier.

bidders, each with a private valuation

. If a player wins the auction and has to pay a price of

they have a utility of

. If a player loses their utility is 0. Players want to maximize this utility.

. The other players have bids

what would his utility be? We consider two cases cases (

) which both split into two cases again.

On top of this suppose that player

be the second highest bidder. What would have happened if player

they would still win and still pay

thus the utility would be the same. And if

. So they were making a loss, while when bidding

they do not win the auction having a utility of 0. That is actually better.

did not win the auction with bid

, having a utility of 0, and now lowers his bid to

, then he still will not have the highest bid. Hence his utility remains 0.

he would never be worse off by decreasing his bid

. Then raising his bid to

would still make him the winner. The second highest bid has not changed though so he will just pay the same price, not changing his utility.

did not win with bid

he might still lose, keeping his utility at 0. Or he could win and since he is bidding

, which means he will earn some (or stay at a utility of 0 if the second highest bid is equal to

In all the scenarios we considered above, the player was never worse off by bidding his value

This is very nice. When using a second-price auction the best strategy for a bidder is to just bid what they think the item is worth. No difficult guessing what the other bidders might bid and adjusting your bid on that. This was the main reason for using the second-price auction for RTB auctions.

Not so good after all

The second-price auction was used until 2019 for online banner auctions. Then, the industry has switched to first-price auctions. Why has this happened? I will mention two reasons.

One reason is that only the auctioneer knows all the bids. This gives the auctioneer the power to manipulate the price that is ultimately being paid. Consider a situation with only two bidders where one bids very low and the other very high, then the high bidder only has to pay very little while they were valuing the banner space much higher. The auctioneer can add hidden fees, or add some fake bids to jack up the price. In a first-price auction this is not possible because you know what you bid.

Another reason is that in the above analysis we considered a single item, while there are billions of advertisement spots auctioned every day. Advertisers usually have some daily budget and instead of finishing their budget before lunch they rather win more auctions spread throughout the day for a lower price. With this observation it is not true anymore that bidding your value is the best thing to do.

The best we can do

Are there better alternatives? The field of mechanism design is actively trying to come up with ways to better analyze existing mechanisms and finding new mechanisms but for now this is the best we can do.