Zooming in a chemical reaction! 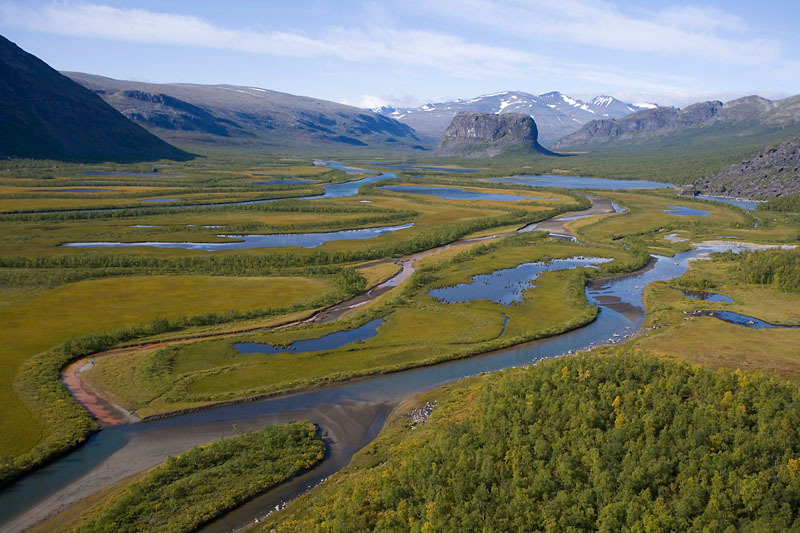 Chemical reactions evolve in the same way as water flows through a network of rivers. Is it so simple actually?

To start with, suppose we have a reaction mechanism that involves several steps and consider the corresponding reaction network. Such a mechanism is illustrated in Figure 1 below. 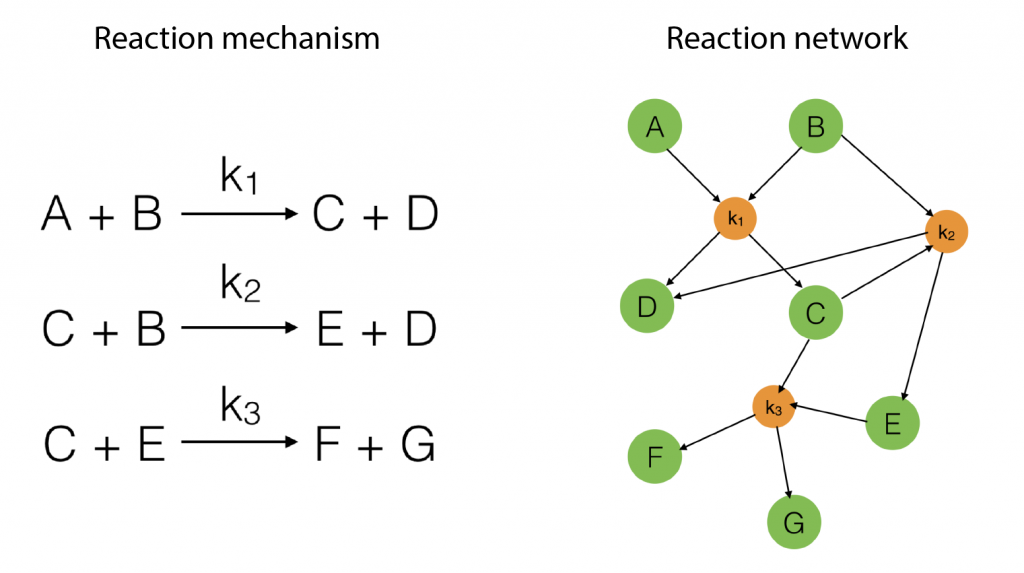 Figure 1: An example of a simple reaction mechanism

"With no doubles, the kinetic model is the central idea in the studies of co-occurring chemical reactions, it is basically a dynamical system that tells us how the concentrations of chemical species evolve in time. This dynamical system may involve many equations, but it is typically very ‘sparse': only few variables per one equation. Chemists like represent this sparse structure by a network. The properties of the dynamical system can then be mapped to the topological peculiarities of this reaction network," says dr. Ivan Kryven, from the van 't Hoff Institute for Molecular Sciences, University of Amsterdam.

Lets see an example, suppose we have two reactants, denoted by

to yield the two products

. Schematically this is depicted as follows:

Then the rate of this reaction is

is some coefficient. In this equation,

are the concentrations of the corresponding molecular species and their product determines the probability that they find each other and react. The higher the concentrations, the easier for the molecules to collide. The exponents

specify how many molecules of each reactant are needed for the reaction to happen. The example above requires

, called the rate coefficient, includes the information about the conditions in which reaction happens (temperature, pressure, etc). Rate coefficients are usually obtained from the experiments or from quantum chemical calculations, these details are omitted from the article and we suppose that the values of

are known for the considered reactions.

The main motivating question leading to kinetic models rises. How do the concentrations of the various molecular species change given the rates of the reactions? Suppose we have a reaction mechanism where

molecular species take part. Then we would like to know what the concentration of each one of them is at a given time

, these concentrations will be denoted by

. The left hand side of each equation in the kinetic model is the partial derivative of a concentration of a particular molecular species with respect to time,

come from rates of reactions that include

as a product (the reactions that produce this species). The negative term includes all the rates of reactions

plays a role of a reactant (it undergoes a transformation and its concentration decreases)!

Usually kinetic models are constructed manually. The problem comes when the reaction mechanism is too big and constructing a kinetic model requires a lot of effort and attention. Then, the question is: how to transform the information from the reaction network to the kinetic model?

The reaction network can be described by the adjacency matrix

represents the number of molecular species and

the number of reactions.

has two types of nodes, nodes corresponding to:

. The weight of a node corresponding to a reaction denotes the rate coefficient

of the corresponding reaction.

that correspond to the species nodes in the adjacency matrix are zero. The shape of all these quantities is illustrated in Figure 2 below. 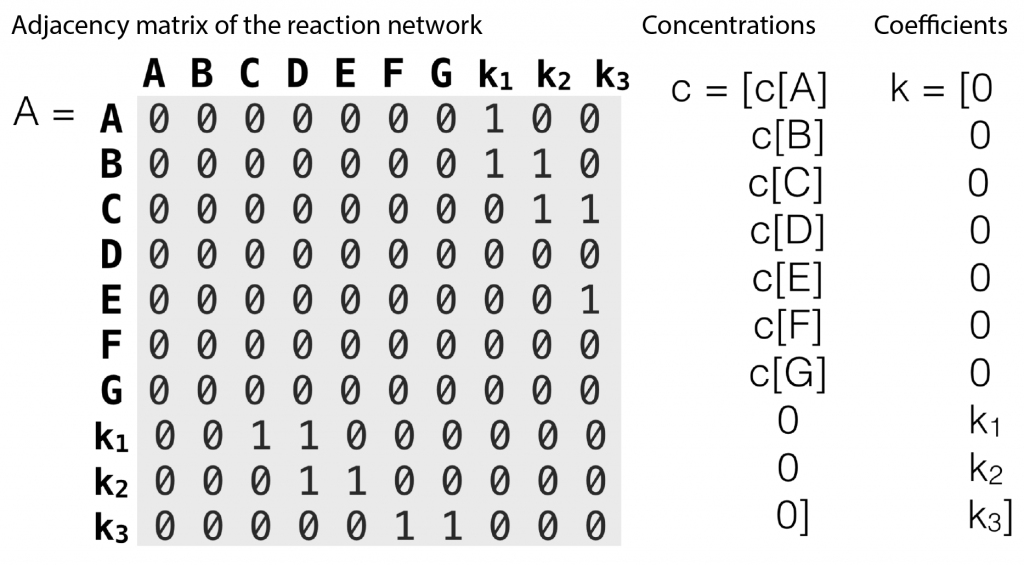 We consider first the case of a reaction mechanism that consists of only first order reactions. For a state node

, the differential equation describing the distribution of species concentration

determines the sign of the term: a positive sign means that the concentration of the molecular species increases, a negative sign that it decreases! The equation in \eqref{eqn:secondform1} conveys exactly the same information as equation \eqref{eqn:concentrations}, it is just written in terms of the reaction network!

The differential equation given above for

can be extended to cover reactions of the second order, then it takes the form

The product sign in the last part of the equation accounts for the number of reactants in the reaction.

Exercise: Write the equations in \eqref{eqn:secondorder} explicitly for the reaction described in Figure 1 (use the matrix representation in Figure 2). Interpret these equations!

For this reaction we have

(that is three reactions,

(that is seven species taking part in the reaction). Hence for the first species, denoted by

to give molecules of types

. Hence the concentration of

can only decrease, that is why the minus sign appears. And this will keep going until there are no molecules of type

left. The higher their concentration the faster they will react with each other, that is why the product

Let us split the vector of rate coefficients

is non-zero for first order reactions and

is non-zero for second order reactions.

yields the differential equation for a mixed reaction network,

We can solve the system of equations in \eqref{eq:mixed} numerically, this provides us the information about the distribution of the concentrations of all species present in the resulting reaction network. In the end, one might be interested in tracking the cumulative amount of concentration of various functional groups rather than specific molecular structures. This can be done by lumping the concentrations of all the species according to the functional groups they contain. As it was discussed in the preceding article, functional groups are defined as patterns on molecules. By doing so, one can observe the global picture of the chemical process and compare the results to the experimental data, that are usually reported in terms of distributions of various functional groups.

To summarize, in this article we have introduced the systematic way of reconstructing the reaction network into the kinetic model of the chemical process. The kinetic model describes how the concentrations of molecular species travel in time from one state of the reaction network to another. Solving the kinetic model allows to validate the result by comparing the distribution of various functional groups in time with the kinetic data from the experiments. This way of dealing with the complex chemical systems is quite generic and allows to explore them in a great detail.