Yuliia Orlova October 11, 2020Articles, Chemistry, Mathematical models
Many scientists nowadays, including myself, develop methods that can be used in the restoration and preservation of our cultural heritage.


Imagine that you are a young artist living in the 19th century. You study a lot and buy cheap paints and canvases from the local art supply shop. You rent a room in the attic and you like to do various experiments with paints.

Suddenly an important collector buys your painting and you become famous. Your work is exhibited in the best salons of the city and people are willing to buy even your old paintings and sketches.

This was the experience of many artists who created our cultural heritage, and of course we would like to preserve their work for the future generations. Paintings are not stable objects: while you are reading this article, paintings are slowly decaying in the museums all around the world. And if we don’t want art to vanish completely, we should take care of it and make sure that we understand the way it’s ageing.

Before treating valuable pieces of art, the conservation scientist makes an extensive analysis of the state of the painting. However, the artist from the paragraph above is not an easy case for the restorers and conservators. Bad quality paints and poor storage conditions may lead to unexpected and complicated chemical changes in a paint layer, and the restorer or the conservation scientist might not be able to interpret the data, which he or she got during the analysis. Thus, a lot of scientists nowadays, including myself, develop methods that can be used in the restoration and preservation of our cultural heritage.

An example where knowledge of the chemical processes behind paint drying is crucial is described in an article of Joen Hermans for The Analytic Scientist:

“The formation of metal soaps in oil paint is a good example. If you mix a lead- or zinc-containing pigment with oil and let it age for a few months under humid conditions, metal soaps (complexes of metal ions and saturated fatty acids) will spontaneously form.”

And from his personal blog we read:

“The presence of metal soap phases has been linked to many types of paint deterioration, such as brittleness, delamination and transparency of paint layers, as well as the formation of disfiguring protrusions on paint surfaces.”

To help restorers and conservators interpret complicated chemical data and degradation effects seen in paintings, we decided to dive into the chemistry of oil paint and study how properties of paint change under various conditions. As watching actual paint dry is not the most exciting activity for a scientist, we took the safest and the fastest method: computer modeling of chemical processes happening in paint. The method does not damage any paintings, and good models can predict years of paint drying in an hour or two.

From paintings to networks

At this point you may ask the question: “Wait, what is this article doing on the Network Pages? Does it have to do anything with networks?”

The answer is: oil paint is a network! Thus, modeling of the drying process of oil paint is actually a problem of network modeling.

Oil paint mainly consists of pigment and binding medium. Pigment is a powder, which is responsible for the color of paint, while linseed oil is a common binder that holds pigment particles on a spot, where artist places a paint stroke. In liquid paint, linseed oil molecules are floating around while being disconnected. When paint is out of a tube and exposed to air and light, linseed oil molecules become reactive and rapidly connect to each other. In a week or so, all oil molecules connect in a network and form dry paint film, which does not stick to your finger if you touch it (please, don’t do it at the museum!). 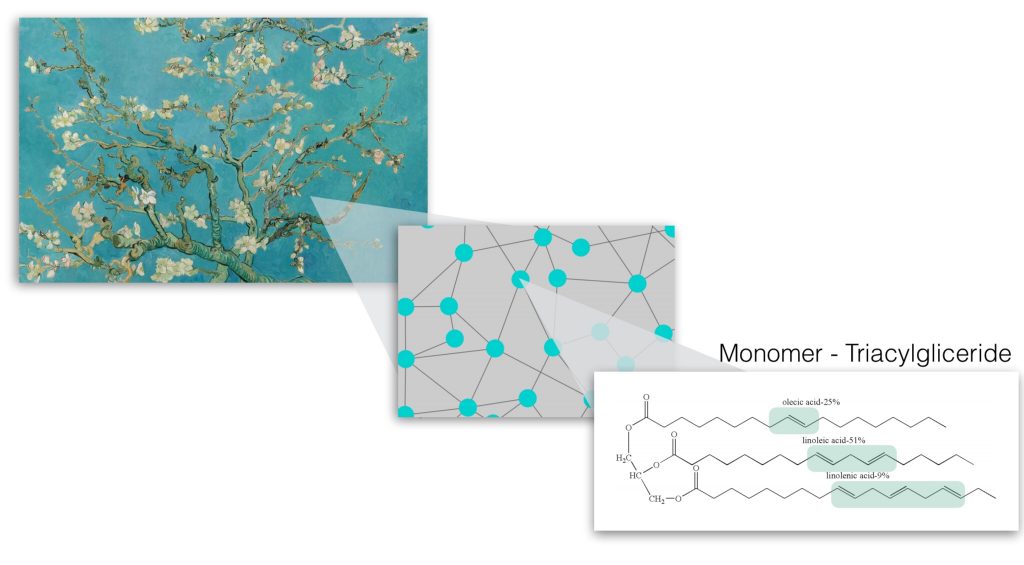 Figure 2: Oil molecules (monomers) make connections with each other and form a giant polymer.

When studying the chemistry of oil paint the major difficulty arises from the very complicated reaction mechanisms that take place. These take place on large molecules causing them to grow even larger. One molecule of linseed oil has up to nine spots, called reactive sites, where multiple reactions can take place. Some reactive sites may react fast, while others may remain untouched for a longer time. Knowing the elementary reactions that take place at each reactive site is important for the further construction of a mathematical model which can describe the numerous chemical processes in linseed oil. But enumerating these elementary reactions is a rather labor-intensive task, this is the first major challenge we had to tackle.

Overcoming challenges with math and algorithms

To enumerate all elementary reactions we designed a computer algorithm, which is based on the resemblance between molecules and graphs, as mathematical objects, in order to “program” this complicated chemistry. The key idea of this algorithm is that we program the reactions, or “tell” the algorithm which reactions happen, and the algorithm successively applies them to each vacant spot on a linseed oil molecule.

Figure 3: Molecules are represented as graphs

When the algorithm runs on a computer it confronts the second challenge: the ever-growing molecules. In some reactions, molecules form connections between each other. The average linseed oil molecule consists of 161 atoms, hence when connecting to another molecule it forms a new molecule consisting of 322 atoms. We see that It takes only 7 linseed oil molecules to form a polymer structure consisting of more than 1000 atoms, which is rather small in reality, but very big for a computer to handle, as computational complexity of some operations on graphs grows exponentially with the size of the graph.

In order to tackle this second major challenge we decided to employ a concept from network theory: the random graph – an ensemble of graphs that satisfy some given constrains. Think of each linseed oil molecule in a polymer as a node with several connections sticking out. These connections represent in an abstract way the reactive sites of the molecule and they are not explicitly connected to other molecules (see figure below). In this way, we can represent a polymer as a random graph which we then include in the algorithm we developed. With this representation, we can safely run the algorithm on a computer and uncover a rather big in size set of reactions happening in linseed oil. 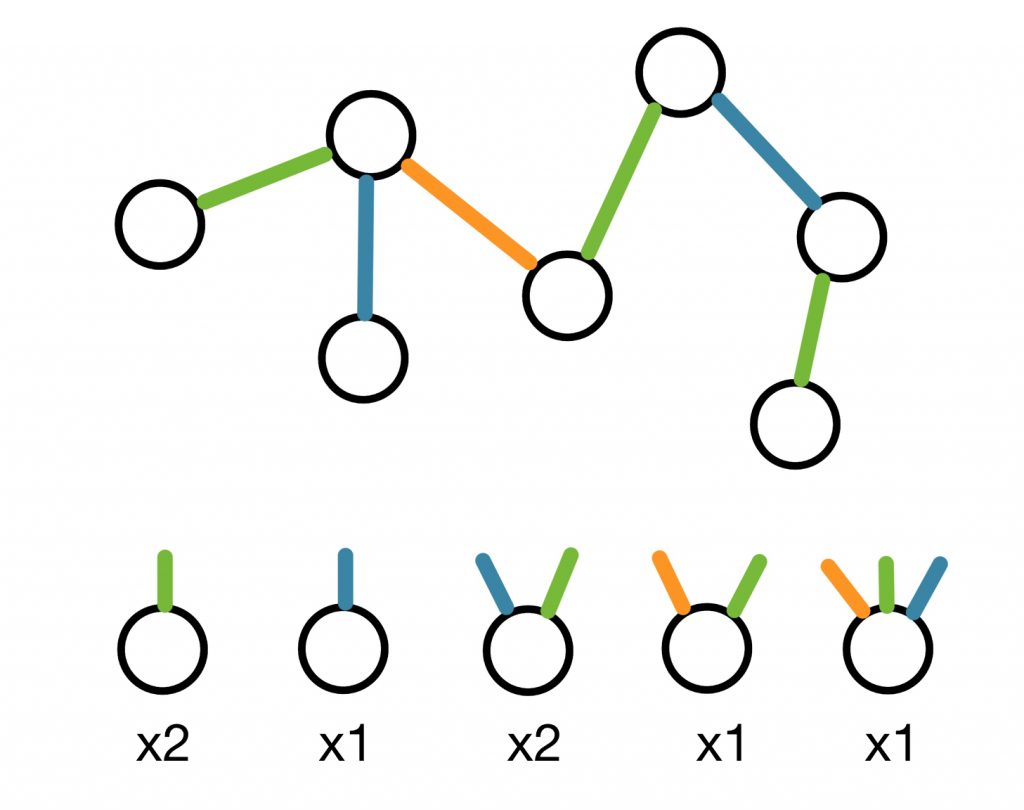 Knowing the reaction scheme, we then write down a system of differential equations, which describes how these molecules form and how they react with each other on different stages of the drying process of oil. This system of differential equations is a mathematical model that tells us what is happening in the oil paint sample at each point of time in the period of 10, 20 or even 100 years. The results obtained from the model provide the chemical composition of oil paint at each stage of the life of oil paint, how well the molecules of linseed oil are connected with each other and how these factors are changing in different temperatures.

From networks back to paintings

Having detailed information about the chemical composition of oil paint may help to interpret experimental data and answer questions as:

- What is the age of a painting?

- What is the composition of the mixture of oils used by one or another artist?

- How do various pigments influence the degradation process?

With this information, we can help the conservation scientist to solve some pieces of a puzzle related to the degraded oil paint.

The featured image is by Ankhesenamun 96 on Unsplash.