Aida B. Paalman-de Miranda: a topologist from Amsterdam

Aida B. Paalman-de Miranda was born in Surinam in 1936 and traveled at the age of 17 to The Netherlands, where she studied mathematics at the University of Amsterdam. In a recent article in the NRC we read about Paalman-de Miranda:

“she was a mathematician that loved her field, pure mathematics, and specifically topology and set theory.”

Paalman-de Miranda did her doctorate under the supervision of the famous topologist Prof. Johannes de Groot at the Mathematisch Centrum (today CWI). In 1966 she became a lecturer and some years later a full-professor in pure mathematics. She was moreover the first woman professor in mathematics at the University of Amsterdam.

To commemorate Paalman-de Miranda I would like to describe in this short article the area of mathematics that she loved and devoted her career to, topology.

These three geometrical objects are topologically equivalent. The rather complicated shape of the rabbit is simplified by transforming it to that of the sphere. This picture is taken from the article Het vormen van ruimte: van Poincaré tot Perelman by Ronald van der Veen, Nieuw Archief voor Wiskunde, Maart 2014.

An other funny example is that of a cup and the donut, formally called the torus, which can also be transformed into each other using continuous transformations. This fact gave birth to the joke that a topologist can’t see the difference between a donut and a coffee mug.

Made by Lucas Vieira, found in Wikipedia.

On the other hand, a torus and a sphere are not topologically equivalent since the torus has a hole which we can’t make by applying only continuous transformations on the sphere. You must be wondering now how all these ideas came to exist and why were people intrigued people to think of deformations of geometrical objects. Amazingly enough, the answer to this questions came from space and the movement of the planets! 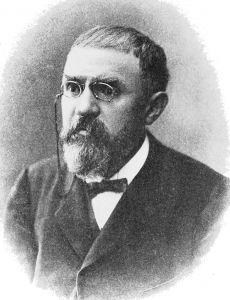 Poincaré needed thus a methodology, and the corresponding mathematical language, to study global properties of mechanical systems. This was nicely phrased by Ronald van der Veen in an article for the Dutch mathematics magazine Nieuw Archief voor Wiskunde in his question

“What remains from geometry if we disregard irrelevant details like angles, distances and straight lines?”

In order to approach this question Poincaré started developing a beautiful mathematical theory called topology.  Therefore, in topology it doesn’t matter if you work with a ball or with a rabbit-shaped object, since both of these objects are topologically equivalent. The big advantage though is that the ball is much easier to work with. But you cannot use the ball if you want to study the torus, since these two objects are not equivalent. Hence an important question in topology, a question that bothered the great Poincaré and keeps bothering mathematicians until today, concerns the classification of geometrical objects in groups of topologically equivalent objects. How many of such basic topological objects are there besides the ball and the torus?

Around 1900 Poincaré himself tried to give an answer to this question by studying quite simple objects. His work and his ideas regarding this issue gave birth to the notorious Poincaré conjecture, an extremely difficult mathematical problem as history has shown. Explaining this conjecture in detail is far from the scope of this article  but it is rather scary and impressive to say that, although the conjecture was posed in 1900, a complete answer was given in 2003 by the Russian mathematician Grigori Perelman! The conjecture remained unsolved for about 100 years!

One ingredient of the answer to Poincaré’s conjecture is Euler's formula, have a look at my previous blog to learn more about this. If you would like to have a deeper look into Poincaré's conjecture and it’s solution and to see why Euler's formula is important I refer to this wonderful article (in Dutch) written by Ronald van der Veen.

On the occasion of Paalman-De Miranda’s death I spent my day reading about topology, this wonderful mathematical theory which has inspired many scientists and has received a lot of attention during the last century. Moreover, the Netherlands has a profound legacy in topology and Paalman-De Miranda’s work added a significant contribution to this legacy. As a small conceptual exercise I would say, have a look at the space around you and at all the objects in it and classify them into classes of topologically equivalent objects! Have fun doing a little bit of topology.

The featured image is from Pixabay.