In this article we discuss how, during a pandemic, actions and interactions can have a huge impact on a big part of a population in a very short time.

“Your actions can have an effect on someone you don’t know!”

“Try and reduce your movements and interactions!”

We’ve heard phrases like these multiple times over the past year. During the last months, a lot of experts have appeared in the media discussing the medical and scientific aspects of the coronavirus. Typical examples of concepts you may have read about are the Basic and Effective Reproduction Number, or the widely used Susceptible-Infected-Recovered mathematical model used to predict how the virus will spread in the short term (S-I-R model). A crucial component in many of these discussions is the term contact. In different countries, the virus followed different paths and it is natural to wonder how the connectivity, in the sense of who-comes-in-contact-with-whom, of the individuals in the population, affects this spread. Commuting every day to work, traveling to distant destinations, visiting friends in other cities are habits we are rather used to. When you go to the supermarket or take public transport, you share space with people who might be total strangers to you. Modern societies are very interconnected, maybe more interconnected than we think. How does this connectivity play a role in a pandemic? Let’s have a look into this. 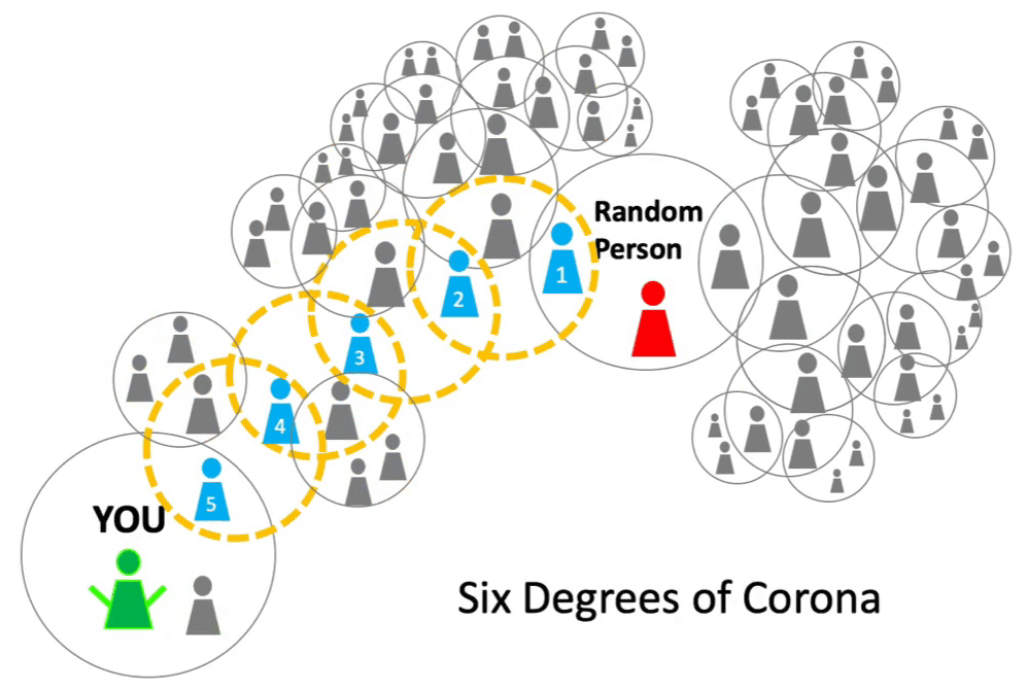 Depending on where you go and how you act, your activities can increase or decrease the risk of coming in contact with a virus. In case of a pandemic, it is important to take this into account. We know that in the case of coronavirus, the virus particles can survive on some surfaces for some amount of time and that areas that are not well ventilated can harbor it — potentially increasing the probability of infection. Moreover, in crowded spaces, people can come in contact with people they have never seen before. As you can see in the illustration on the left, while your bubble of regular contacts may be small, it overlaps with “bubbles” of people who you might not know. So people who are seemingly strangers to us might in this sense be closer to us than we think.

Think of the following example, consider the size of the network of your friends. This might include tens of people, have you ever considered how large this network becomes when you also include the friends of your friends? And maybe also their friends? Do you see a pattern in how fast this network grows? In just three steps you can reach a lot of people, potentially from various countries. Maybe even before reading this article and doing this calculation you had at some point the feeling that we are living in a small world.

In 1967 Stanley Milgram, professor of psychology at Yale University, carried out an experiment to test how connected social networks are. Volunteers in the United States were told to send a package to a target person in Boston, whom they didn't know personally, by mailing it to close personal connections, who would then forward it to someone within their contact network respectively. He found that the letters had changed hands about six times on average, giving rise to the concept of Six Degrees of Separation, a term that Milgram himself never used, to be honest. There has been a lot of discussion concerning this topic, and a lot of criticism as well, and it has initiated a lot of research and more experiments to understand this so-called small-world phenomenon.

There is also a nice game developed by Wikipedia where you can try a similar experiment on your own! You can play a game that adapts this concept to the hyperlink-network made up by Wikipedia pages! The goal is to randomly generate a starting page and a target page and try to reach the target page from the starting page only using Wikipedia-hyperlinks. Can you reach the target article  within six clicks or less?

We now view the small-world phenomenon from the perspective of a contagious pandemic. Coronavirus spreads through people’s close contact networks – making us an important part of any pandemic. While someone's close contact-bubble seems relatively small, once you consider the extent of each person’s networks, it follows that the risk of being in contact with someone with coronavirus rises with the more people we interact with.

In mathematics, exponential growth refers to a significant growth in a few steps. When thinking of the spread of a virus the following example illustrates how exponential growth occurs; if each infected person transmits the virus to two other people on average, then the virus spreads exponentially fast.

In general, the average number of people infected upon contact with an infected individual is called the Basic Reproduction Number, denoted with

. As you see in the visualization, in the case of

, one infected person could theoretically spread the virus throughout a contact network to 128 people through six contacts in a very short period.

Therefore, when being told that “Our actions can have an effect on someone we don’t know!” and that we should “Try and reduce your movements and interactions!”, we are being warned that we are closer to the virus than we expect. This is why we have been asked to reduce our daily interactions and to be careful who we come in close contact with – we never truly know how big our network’s neighborhood is!