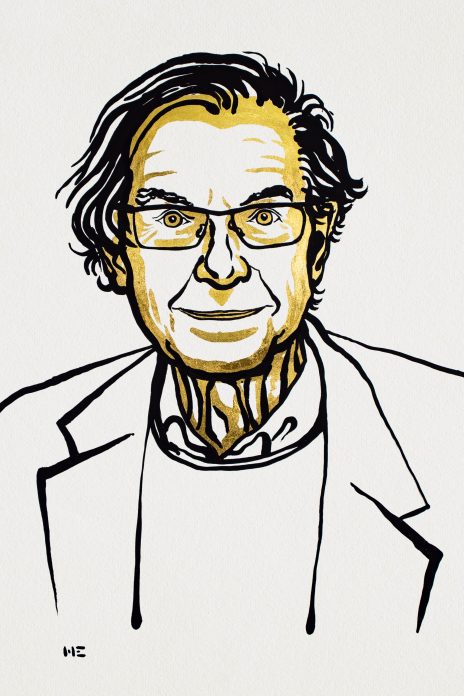 The prize was awarded to Roger Penrose "for the discovery that black hole formation is a robust prediction of the general theory of relativity". In this blog post I would like to share a personal story of how I met Roger Penrose.

To start with, Roger Penrose has written various books for different audiences, from purely scientific books to books that are intended for a more general reading. I have three of his books, his monumental The Road to Reality, The Emperor's New Mind and The Nature of Time and Space. Early 2018 a friend of mine told me that The Road to Reality was about to be published in Dutch and that Roger Penrose would be visiting the Netherlands during the summer of that year to give a series of lectures. She suggested it may be possible to arrange an interview with him. This was around June 2018 if I recollect it correctly. With my colleague and co-editor in the Dutch magazine Nieuw Archief voor Wiskunde Raf Bocklandt we couldn't resist this offer and immediately said yes!

In July 2018 Roger Penrose visited Utrecht for the ‘19th UK and European Meeting on the Foundations of Physics’. We would meet him in his hotel on his last day in the Netherlands, right after the interview he had to go to Schiphol airport to fly back to England. Some days later he would also fly to San Francisco for the opening of the Transbay Transit Center (TTC) which is decorated with a so-called Penrose tiling.

We met with Raf at the Janskerkhof in Utrecht and we walked towards the hotel we would meet Roger Penrose, we took the elevator and I can still remember we were both rather nervous. When we exited the elevator we saw him waiting for us at the door of his room. This is the story of how I met Roger Penrose., he was standing there, at the door of his room waiting for us.

Every now and then I read the interview again so that the discussion we had on that day will stay lively in my memory. After the interview and while writing it down I remember trying to work out and understand a part of the interview concerning gravity and entropy:

It took me a couple of hours to understand why this makes sense, although a complete answer still eludes my understanding. In some version of the interview we had worked this out but in the end we chose to omit it.

Reading the interview again last week, after a friend of mine was really enthusiastic about getting a copy, I was thinking about something that Roger Penrose told us during the interview.

“I was interested in physics all the time. The thing that set me off in that direction was a series of radio talks by Fred Hoyle (British astronomer and cosmologist in Cambridge University). The last talk was about the steady-state theory. In this theory he described how the universe remains the same and how galaxies disappear when they reach the speed of light. I did not understand that, how could they disappear like that? They fade away maybe, so I went to Cambridge to discuss it with my brother Oliver. We were having lunch together and he said ‘I am no expert in that, but a good friend of mine is sitting over there, he will tell you, he is an expert in cosmology.’ That was Dennis Sciama, so I described this to him and he had never seen this argument, he was impressed enough. When I went to Cambridge to do research in pure mathematics we had discussions about cosmology and physics, he knew everything that was going on.  And this was wonderful education for me.”

When I read this I realised that many steps we make, as a scientist in this case, are due to a random encounter with someone who will just have the right answer or suggestion at the right moment. This is one of the things I miss the most now that we are mostly working from home, these random encounters which lead to amazing surprises sometimes.

For those who want to have a look at the interview it can be read here.