As mentioned in previous posts, on the 7th of April the Dutch Academy of Sciences and Arts (KMAW) organizes the "Evening of the Abel prize", a yearly event with as goal to discuss aspects of the research of the latest Abel prize laureates. The event is meant for a general audience, and it is a unique opportunity to hear about modern mathematics! This time the event has an extra special touch, as both prize winners will be present and speak about their work in front of a wide audience. 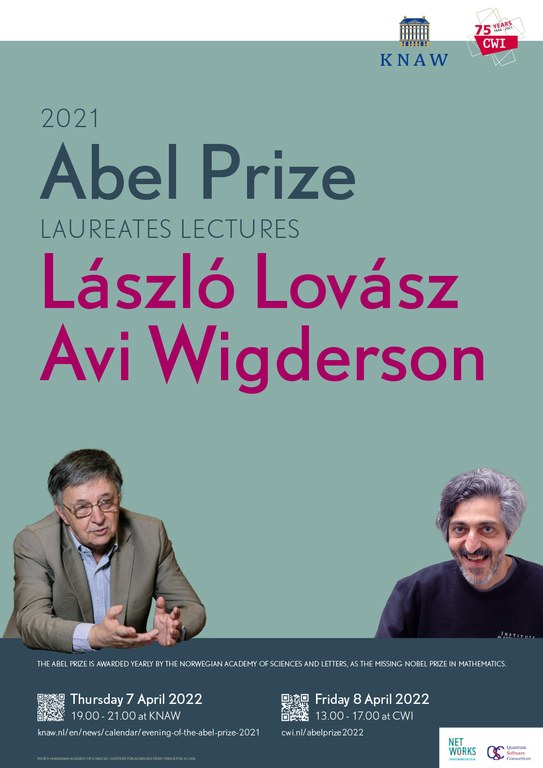 As a warming up for the event we present two interviews with the Abel prize laureates (with László Lovász and Avi Wigderson) published in the Dutch Mathematics Magazine Nieuw Archief voor Wiskunde.

On graphs and graphons

Raf Bocklandt and Nicos Starreveld interviewed László Lovász in the summer of 2021. In the interview we read:

“In the seventies we were investigating with Paul Erdős and Joel Spencer the possible numbers of triangles, numbers of pentagons, and so on; we wanted to understand how these numbers relate to each other in very large graphs. At that time we could only prove some starting results. Around 2002 when I was at Microsoft Research, Michael Freedman was in the group and he was working on quantum computing. He was trying to use topological methods to improve the stability of quantum computation. He was interested in a statistical physical model with a specified partition function. Freedman’s question could be translated to a problem of characterizing the sequence of homomorphism numbers of different graphs into a fixed graph. Together with Freedman and Lex Schrijver we solved this problem by formulating a semi-definiteness condition on these homomorphism numbers.”

Curious to read more? You can find the whole interview, written for the September issue of NAW here.

A look at mathematics through the lens of computation

For the March number of NAW Raf Bocklandt interviewed Avi Wigderson. In the interview we read:

One of the lines of research that Wigderson pursued in the eighties and nineties was interactive proofs, and in particular the idea of zero-knowledge proofs. This concept formalizes the problem that arises when you want to convince someone that you have a method to do something, without revealing any information about the way it works or giving away the answer to the problem.

“The idea of proving things without providing any knowledge is something paradoxical and therefore very fascinating. I cannot imagine it will not peak anybody’s interest once they hear about it. The proposal was made in 1985 by Shafi Goldwasser, Silvio Micali and Charles Rackoff. The motivation they had came from cryptography. It’s very natural in cryptographic settings that you would like to do something that depends on a secret, and the other party wants to make sure that you did things correctly without cheating. On the other hand, you don’t want to show them how you did it because part of the input is your secret. The most basic example, one that is done daily millions of times, is when people pick a public key. This often means that you pick two primes, multiply them together and then publish the result. If I give you
such a number, why should you believe me that it’s a product of two primes? Maybe it’s a product of three primes, maybe I didn’t do it correctly. How do I convince you? Well I can give you the factors but that would reveal my secret. That was their question: is it possible for me to convince you that I have a proof of something — and here the proof is the two prime factors — without showing you the proof. Indeed, even without giving you any information whatsoever."

Curious to read more? You can find the whole interview, written for the March issue of NAW here.

If you found this interesting then you should definitely join the event on the 7th of April! More information can be found here.