The body-clock is a cluster of neurons connected to the eyes that dictates the rhythm of most bodily functions.

For example, the body-clock, technically known as the Suprachiasmatic Nucleus (SCN), regulates the release of a hormone that determines when we wake up and when we feel sleepy. Research into the function of the body-clock is important: the 2017 Nobel prize for physiology or medicine was awarded to three scientists (Jeffrey Hall, Michael Rosbash and Michael Young) for their significant contributions to the understanding of the inner workings of the body-clock.

Figure 1: An artistic view of the two groups of neurons and their synchronization level. Photo by Icons8 team from unsplash

The neurons "fire" in a periodic way. This means that they pass through a variety of states, culminating in the release of electricity before the process starts again. In order for the body-clock to function optimally, the firing of the neurons needs to be synchronized to some degree. This is achieved because each neuron reacts to the neurons firing around it, by adjusting the moment at which it fires itself. Many experiments have been done to understand the structure and functioning of the SCN better. These experiments must also be supplemented with mathematical models, which can guide the experiments. One of the mathematical models used to describe synchronization was proposed by Kuramoto in 1975.

After the animal displays a regular pattern, one can change its environment, for example, by exposing it to constant light. This leads to an interesting phenomenon. In some cases the animal will start being active in two periods during the day. Recently, some authors have argued that this is due to the neurons in each community of the body-clock being synchronized within the community but anti-synchronized with the neurons in the other community. This state of the body-clock is called the phase-split state, and the activity pattern observed during the transition to this state can be either smooth or chaotic.

We can represent the interactions between the neurons in the body-clock as a network. In our case the network has two communities, where each community has many edges between the nodes, while there are only few edges between the nodes in different communities. The network describes which neurons interact with each other, but it does not yet tell us how they respond to one another. This is where the Kuramoto model comes in. The state of each neuron at each point in time

can be thought of as the position of a dot on a circle, or equivalently as an angle

tells us which community the neuron is in (so

tells us which neuron in that community it is, where we assume that there are

neurons in each community, (so

). For the interaction we want that a neuron adjusts the time at which it fires as a result of some other neuron firing before it, either by firing a little earlier, or by firing a little later. The easiest way to do this is to adjust the neuron represented by angle

as a response to the neuron represented by the angle

via the sine of the difference between the angles, i.e.,

. Since a neuron is responding to all the neurons it is connected to simultaneously, it will adjust its angle by an amount that equals the sum of all the adjustments it would make for each neuron separately. In order to model the fact that the neurons are positioned in a fluid, we add a small random term to the total adjustment.

The Kuramoto model has been widely studied since it was conceived in 1975. Most studies have focused on the case where all angles interact with all other angles (i.e., the network is on the complete graph). Since this is clearly not reflecting the structure of the body-clock, we analyze what happens if we consider the Kuramoto model on a two-community network. For this purpose, we take the neurons in the same community to interact with a strength given by a parameter

, which can be positive, zero or negative. When

is positive the two communities try to align with each other, when

is zero there is no interaction and when

is negative the two communities repel each other. We are interested in studying which states are possible for the system as a whole when we fix

and consider the number of neurons in each community to be very large.

What may we expect? In the Kuramoto model with the all-to-all interaction i.e., all neurons interact with all other neurons with strength

, synchronization appears as a threshold phenomenon. This means that for values of

below a critical value

the neurons fire completely randomly, while for values of

the neurons start to fire in a synchronized way. When

, which takes values between

represents the case where the neurons are completely unsynchronized and

represents the case where the neurons are completely synchronized. We may therefore expect that synchronization in the two-community Kuramoto model will also appear as a threshold phenomenon.

Of course, in the two-community case we do not only want to know the level of synchronization in the body-clock, but also the synchronization in each community. In order to characterize all the possible stationary states, we also want to know the difference between the average angles in the two communities, which we call the phase difference and denote by

. We found that the phase difference

. The critical line dividing the symmetrically synchronized state and the nonsymmetrically synchronized state is identified as the solution to an equation involving special functions, which means that we cannot write down the solution explicitly. In order to visualize the situation, we plot the critical lines in Figure 1 below and indicate in which regions which solutions are possible. 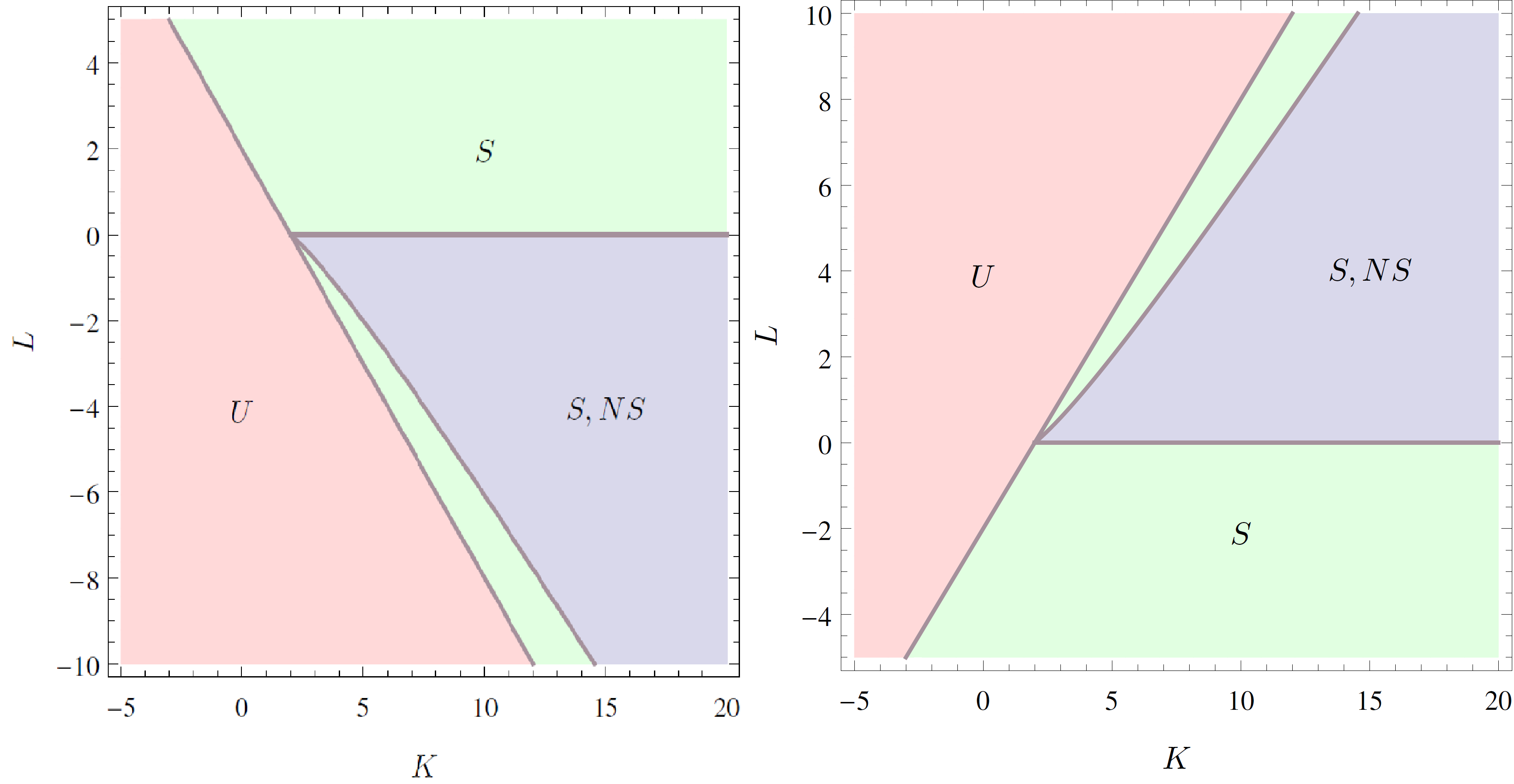 and the right image is for the case

The previous section dealt with the possible stationary states. In the experiments with rats and mice one of the most interesting features that was observed was the possibility to see two different types of transitions to the phase-split state, which is certainly not something that can be understood by studying stationary states. In our model we did, however, see that stationary states exist in which the two communities have a phase difference of

, which corresponds to the phase-split state observed in experiments. To study the transitions between these states (the one with

and the one with

) is a mathematically intractable problem at the moment, but it is possible to see what sort of transitions are possible. The possible transitions that we observed are shown in Figures 2 and 3 below. Here, the average angle for community 1 and community 2 are given by

, and the synchronization levels are given by 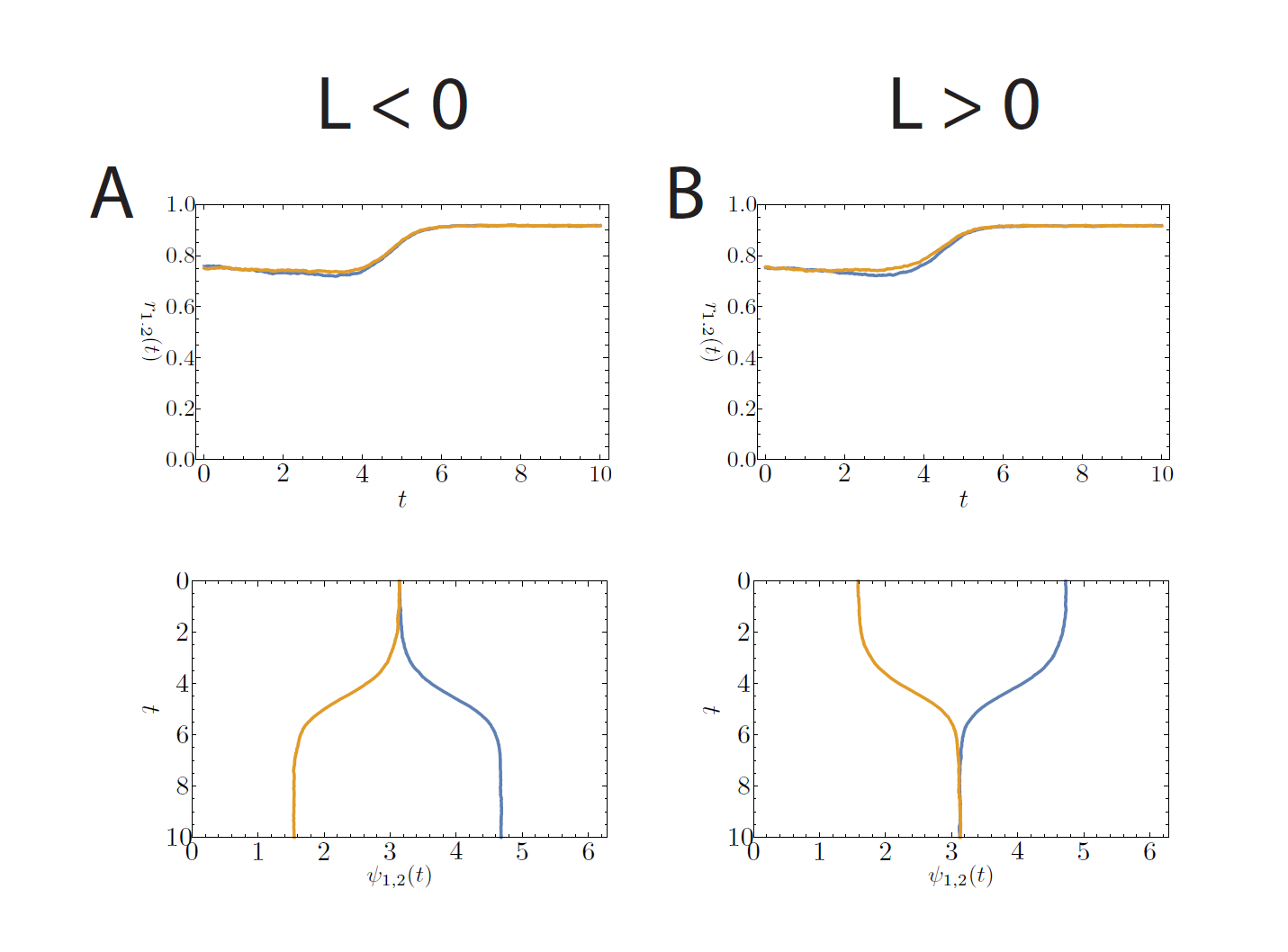 Figure 2: Simulation of 10000 oscillators per community with

). The phases are plotted in such a way that the different communities can be seen as the two components of activity in the suprachiasmatic nucleus. The time on the vertical axis can be regarded as consecutive days. (A) and (B) show the case where 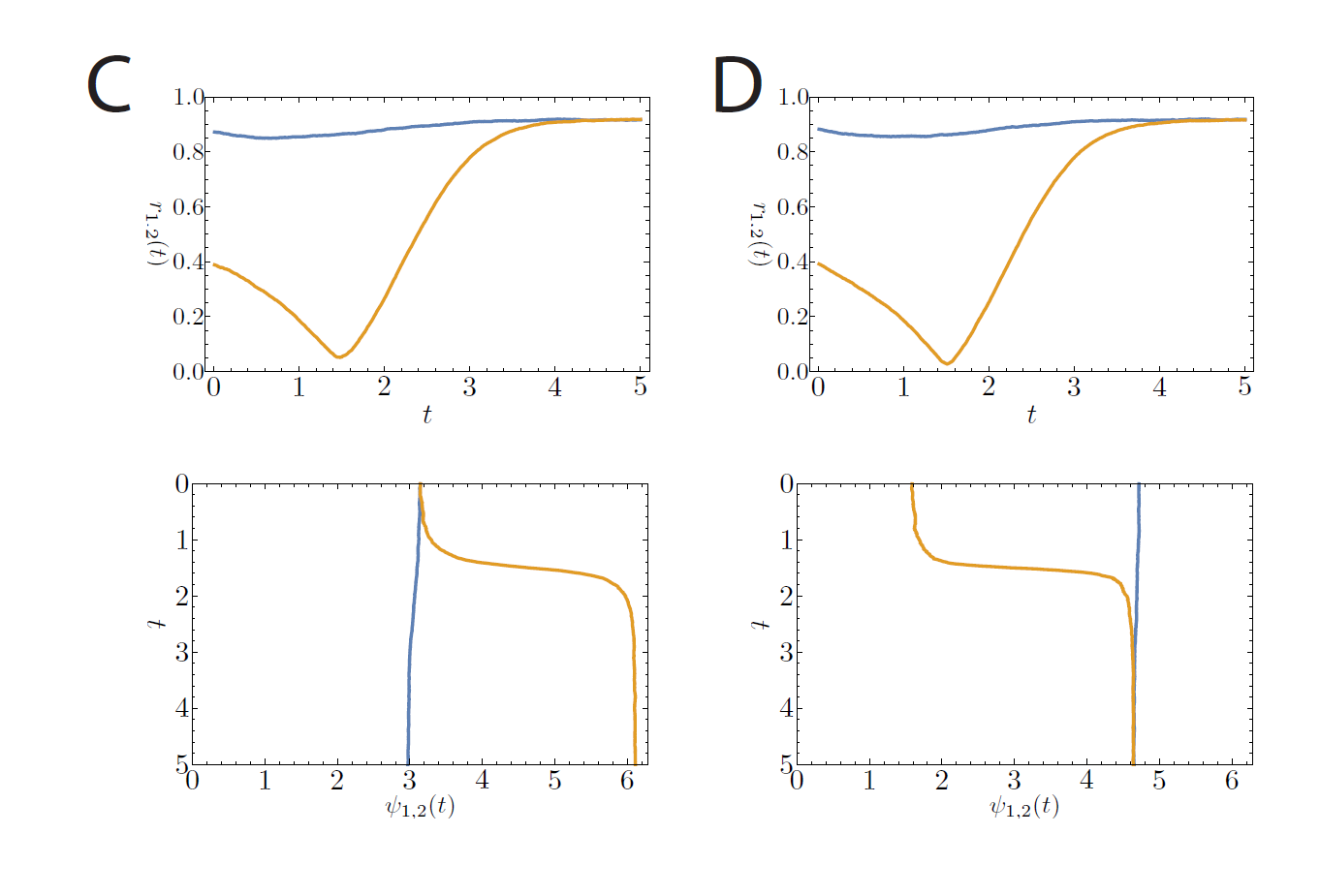 Figure 3: Simulation of 10000 oscillators per community with

). The phases are plotted in such a way that the different communities can be seen as the two components of activity in the suprachiasmatic nucleus. The time on the vertical axis can be regarded as consecutive days. (C) and (D) show the case where

differ at first, but both approach 1 when the stable state is reached.

and the symmetrically synchronized state with

There are two factors that seem to play a role in determining which transition occurs. The first is the initialization of the system and the second is the existence of the nonsymmetrically stationary state. When we start the simulation, we have to chose an initial state for the angles of the neurons. In experiments this state is difficult to interpret, but we can think of it as the situation that prevails immediately after a change of the environment in which the animals live has occurred (e.g. switch from light-dark cycle to constant light). The second factor is more easy to interpret: the strength of the interactions in the network is given by

The body-clock is a complex network of neurons that is difficult to model mathematically, due to its many intricacies. Above we have seen that we can gain some understanding by using mathematics and simulations, but also that experiments uncovering interesting phenomenon can play an important role in guiding mathematicians in making choices about which questions are interesting and worthwhile to study.